Brooke Shields showed up to the Met Gala with a cane as she struggled to walk the red carpet. Shields caught up with E! News and revealed the cause of her pain. 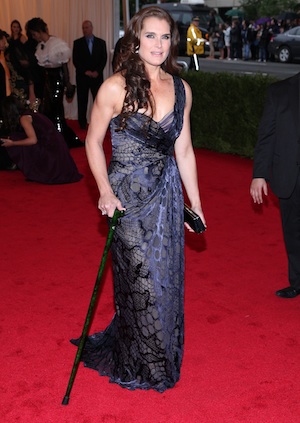 Brooke Shields alarmed fans on Monday night when she showed up to the Met Costume Institute Gala with a cane. The actress looked gorgeous in a one-shoulder J.Mendel gown, but many wondered why the 46-year-old Shields needed a cane.

E! News reports Brooke Shields’ need for the cane came as a result of a damaged knee. Shields told Giuliana Rancic on the Met’s red carpet she tore the meniscus in her knee during a performance of The Addams Family on Broadway. Brooke plays the role of Morticia and took over the part in June 2011 from Bebe Neuwirth.

Shields didn’t seem to let the inury bother her too much. She told Rancic Monday night as the pair chatted on the red carpet her knee was “not a big deal, it’s inconvenient.” She continued, “You know what? We’ll do anything for fashion.”

Shields injured her knee back in December but reported she was still in the recovery process. However, Shields did get a little creative at the Met. She revealed she wore flip-flops instead of heels for the evening. One thing Brooke did struggle with at the Met? E! News says the actress and model quipped the grand staircase at the entrance to the Met was “not helpful.”