Getting married is one thing, and doing so while becoming a stepmother is another. Elizabeth Hurley is juggling it all with not one, not two… but THREE new kids. 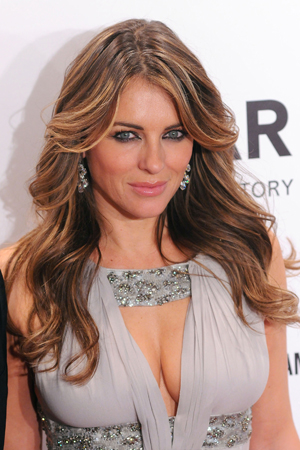 How did you prep for your wedding day? Now that Elizabeth Hurley is engaged to Shane Warne, she has her hands full — not simply with picking out a wedding dress or handling seating charts for the reception.

The Gossip Girl bombshell has taken on the role of stepmother to Warne’s children.

Though already a mother to her 10-year-old son, Damian, she admits that there’s a huge difference between handling one child and taking care of four!

Hurley added, “I’m learning to be a stepmother to three extra children, so that keeps me running around and on my toes.”

The expanded family, among other things, has kept the couple from planning the ceremony — but they’re not necessarily in a rush.

“We haven’t actually managed to arrange a wedding yet,” she noted. “But it’s definitely in the pipeline.”

At the event which honored the late Evelyn Lauder, a tireless breast cancer activist who died in November, Elton John performed a few of his iconic hits. He is Hurley’s longtime friend and godfather to Damian.

“He’s always been a wonderful godfather with my son,” she reflected. “I’ve seen him with his son and he does indeed change diapers. He’s very hands-on and a natural parent. Elton’s always been incredibly kind, gentle and loving.”