Dustin Hoffman has earned his hero stripes by rescuing a jogger in London! The good deed went down in Hyde Park, when the actor happened upon a man having a heart attack. 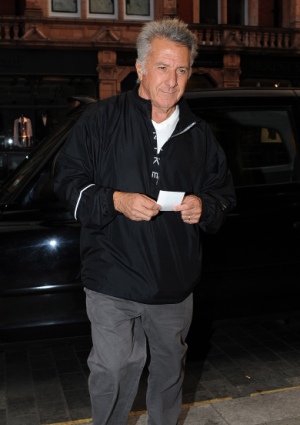 Dustin Hoffman to the rescue! At the age of 74 the actor has added life-saving hero to his list of accomplishments after tending to a man having a heart attack.

The frightening incident occurred in London’s Hyde Park last month. Martin Macarthur, a responder who witnessed Dustin Hoffman‘s heroics, has spilled the details of the jogger’s rescue to British paper The Sun.

While out walking in the park Dustin Hoffman saw a runner fall, and ran to his side while calling for emergency services. The actor went on to stay by the injured man’s side while paramedics used a defibrillator to restart the man’s heart, then gave a statement of the incident.

“It is essential to get a history of what happened, and he witnessed the jogger go down,” Macarthur explained. “He was the main witness and saw him stagger and go down. He stayed on the scene for the whole duration of the resuscitation which was about 15 minutes.”

The fallen runner turned out to be a man by the name of Sam Dempsey, who has no recollection of the incident. “I have no memory of what happened,” the 27-year-old, now recovered, said. “The paramedics told me I had been saved by Dustin Hoffman. It’s unbelievable.”

Macarthur went on to say of the actor, “Dustin was fascinated. He seemed impressed we’d got this guy back so quickly. When we were carrying the patient into the ambulance he walked up and said ‘Great job, guys.’ He really appreciated what had happened.”

Kudos to Dustin Hoffman for jumping into action and saving a life!