Could you put the past aside to be with your ex-husband again? Whether for work or for the kids, Denise Richards does whatever it takes when with Charlie Sheen. 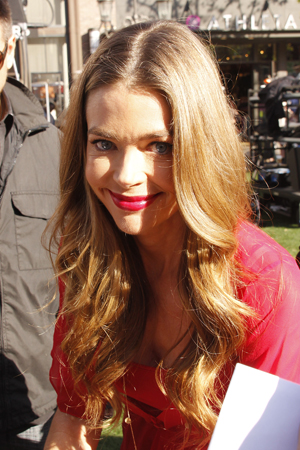 Calm down, Richie Sambora fans — it’s only on television! The two came together for an upcoming episode of Anger Management on FX, and the script had Richards playing one of Sheen’s love interests.

“I got a little nervous when we shot our first scene together because I looked up and I realized everyone was staring at us,” said Richards to E! News at the Golden Hearts Awards, where the Midnight Mission honored her boyfriend, Richie Sambora.

“But I really think it’s more weird for everyone else than it was for us,” she said. “We get along well, and it’s been a long time. We met working and we’ve worked together many times since then.”

Can Anger Management audiences expect to see some PDA onscreen?

“Maybe,” teased Richards. “We had a lot of fun together.”

Richards opened up about the unique Modern Family-like dynamic between herself and Sheen earlier this year.

“We’ve actually become like brother and sister, we really have,” she explained. “We’ve become very, very good friends… When we all spend time together, it’s great for the kids and for us, too. We actually get along.”

What’s their secret to making it work?

“I think [the key is] making it about the kids. The stuff between the couple — if you’re divorced — it’s no longer about you anymore. You have to be the bigger person and make it about the kids and so that’s what we’re doing.”