Emily St. John Mandel has found success at Unbridled Books, a small, independent press that focuses on literary fiction. Both Last Night in Montreal and The Singer’s Gun brought Mandel widespread critical acclaim for her engaging story lines and beautiful writing style. Now Mandel is back with her third book The Lola Quartet. We couldn’t stop reading this impressive book as we were desperate to discover how everything turned out, which is why it’s our must-read.

Gavin Sasaki is a journalist living in New York City working for a small city paper. He’s always wanted to succeed as a reporter, so by all accounts, he is living his dream, yet he is unsatisfied. His job has put him 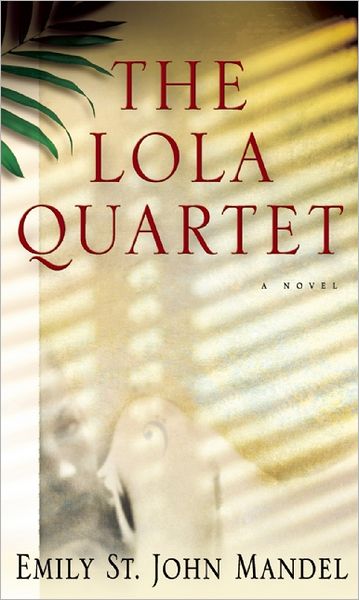 in contact with sad and distraught people, and their desperation has rubbed off on Gavin — his faith in humanity is fading fast, especially as he searches for quotes for his articles. A fateful decision will lead Gavin on a downward spiral from which there is no escape. He knows that, eventually, someone will find out what he has done, and when they do, he is unceremoniously fired from his job.

Before Gavin’s disgraceful departure from the newspaper, he had been contacted by his sister, Eilo, who lives in their hometown of Sebastian, Florida. Eilo is a real estate agent for foreclosed homes, and, as a result, is doing a thriving business in the depressed housing market. On one of her home visits, Eilo saw a ten-year-old child, one who looked exactly like she did when she was that age. She snaps a surreptitious picture of the child and sends it to Gavin, who immediately thinks of his high school girlfriend Anna. She was supposedly pregnant when she disappeared mysteriously, and Gavin can’t help but wonder whether she had his child.

Obsessed by the thought of Anna and his possible daughter, Gavin travels down to Florida to stay with Eilo. Though he’s supposed to be getting his life back together, he spends his days and nights trying to track down his ex-girlfriend and discover what happened to her. Why did she leave so suddenly? Why are there so many different stories and rumors about what happened to Anna, especially considering no one is supposed to have heard from her after she left? And of all people, why is Gavin the one who knows the least about Anna’s doings after she disappeared, when he was her boyfriend at the time? As Gavin digs into these important questions, he realizes he’s gotten himself involved in a dangerous scheme, and his life might be in danger.

Must-read: Next to Love by Ellen Feldman
Must-read: In the Bag by Kate Klise
Must-read: A Wedding in Haiti by Julia Alvarez