Bobby Brown might be closing the chapter on Whitney Houston’s death. He just set a date for a summer wedding to fiancée Alicia Etheridge and it’s just around the corner. 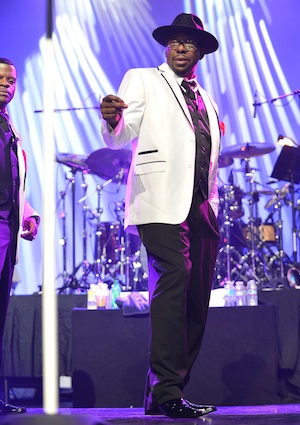 Bobby Brown is set to get married this summer in June to longtime fiancée Alicia Etheridge. Brown and Etheridge became engaged back in 2010 but just set a date this morning. TMZ reports they plan to tie the knot in Hawaii.

Bobby Brown: My kid is not on drugs >>

It’s not clear exactly why Brown and Etheridge delayed their nuptials for so long. Brown’s ex-wife — the late Whitney Houston — passed away in February 2012 and the singer had continual legal problems. Most recently, he was arrested in late March for a DUI.

Alicia Etheridge is currently Bobby Brown’s manager. Brown and Etheridge have one son together — Cassius — born in 2009. The Huffington Post reports Brown’s summer wedding will be a small and intimate affair with only select family and friends in attendance. The same weekend as his wedding Brown will also perform with New Edition for a “special Father’s Day concert” in Honolulu.

Last week Brown finally opened up about his late ex-wife’s death with the Today Show‘s Matt Lauer and refuted reports he introduced Houston to drugs. The Huffington Post says Brown told Lauer he was completely unaware of Houston’s current issue with cocaine.

He also told Lauer he still loves Whitney and believes she loved him as well. “Our relationship was great,” said Brown, “I had 14 beautiful, beautiful years with that woman.” He continued, “I can honestly say that — I love that woman with, with everything that I am. And I believed she loved me the same way.”

It’s seems clear Brown has achieved a certain degree of peace and closure with regard to Houston’s untimely and deeply tragic death. We wish him all the best with his marriage to Etheridge.