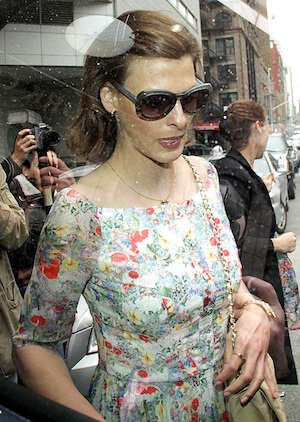 Famed supermodel Linda Evangelista settled her child-support case with billionaire François-Henri Pinault on Monday. While the terms are not public, Evangelista asked the courts to order financial help for her and Pinault’s 5-year-old son, Augustin. It’s reported that Evangelista spends about $46,000 per month in “around-the-clock- nanny care and armed bodyguards,” according to court documents, says the LA TImes.

The paper also reports Pinault initially denied fathering Augustin, but “legally recognized his paternity” in 2007. The LA Times says Pinault allegedly spent only fourth months with Evangelista and only seven days with her after Augustin was born in 2006. At the time, Evangelista refused to reveal Augustin’s father’s identity.

ABC News reports attorneys for Evangelista and Pinault met privately in a New York City judge’s chambers and reached an agreement after about 20 minutes. The details remain private. The supermodel requested help after her annual income of nearly $2 million dropped substantially after a lucrative L’Oreal contract ended.

Pinault’s lawyer, David Aronson, was quoted in the LA Times Monday afternoon and revealed both sides are happy to be done with the dispute. “Everybody’s glad for the sake and the benefit of the child that it’s done.” ABC News described the scene in the Manhattan courthouse shortly after the decision. “After the judge and both lead attorneys returned, and the judge announced they had reached a settlement, Evangelista quickly glanced at Pinault. As they stood outside the courtroom after the proceeding, they appeared deep in conversation, speaking in low voices and with no obvious emotion — both looking serious yet fairly relaxed.”

Pinault is now married to actress Salma Hayek and the two have a 4-year-old daughter, Valentina.