What does it take to get Sacha Baron Cohen to break from his Dictator character? A back stage run-in with Ryan Seacrest, and a bit of guilt over that ash-dumping Oscar stunt! 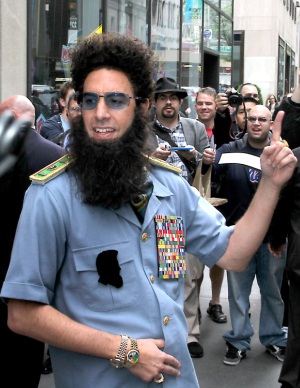 The Dictator‘s Admiral General Aladeen may not have a heart, but somewhere deep, deep down Sacha Baron Cohen does. The actor broke out of his film persona to offer an apology to Ryan Seacrest — and so did his wife!

You never know who you’ll see when you stop by Saturday Night Live, and much to Ryan Seacrest‘s surprise he bumped into not only actress Isla Fisher, but her ash-dumping husband over the weekend.

Detailing what went down during the awkward encounter on his morning radio show Seacrest shared:

“I saw Isla Fisher and I said hi, and she said these words, and then it dawned on me. She said, ‘I apologize for my husband.’ And I said, ‘Oh, yes, yes, gotcha, thank you, thank you very much for saying that…’ I didn’t realize her husband, The Dictator, Sacha Baron Cohen, was doing a walk-on cameo [on the show].”

Shortly after Isla Fisher apologized for her not-so-much better half, Ryan Seacrest and Sacha Baron Cohen came face to face backstage on the SNL set.

“He comes off stage, comes over to me, breaks character and says sorry about the Oscars, it wasn’t personal,” Seacrest continued. “[He was] very, very apologetic and genuine and kind and sweet.”

It turns out that Ryan Seacrest wasn’t even the original target for Admiral General Aladeen’s The Dictator media ploy!

The radio host continued of Sacha Baron Cohen, “He started telling me how it went down. Originally he said that they were going to spill whatever it was in that urn on George Clooney. Someone decided that wasn’t a great idea because he was up for a lot of nominations, it was a big night that night. Then they somehow spun the wheel of tragedy and landed on my name.”

I guess we now know for sure the ash-spilling wasn’t a planned stunt — at least not on Ryan Seacrest’s end!

Do you think George Clooney would have handled The Dictator‘s ash stunt as well as Ryan Seacrest?