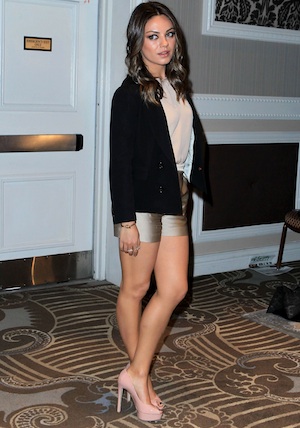 Mila Kunis is in and out of the rumor mill thanks to her new relationship with Ashton Kutcher. However, Kunis gains new press coverage Tuesday morning due to her early-morning heroic efforts. In an exclusive feature, TMZ says Mila Kunis saved the life of a 50-year-old man who “suffered a violent seizure” while at Mila’s Los Angeles home.

TMZ reports their on-site source told them Mila “came running, had her friend call 911, then rushed to the man’s side.” Their source painted a dramatic picture, describing the man as “choking, coughing up blood and vomiting.” The New York Post says Kunis turned the man’s head to the side while someone else put a wallet in his mouth to “prevent him from swallowing his tongue.” Once the paramedics arrived Mila even offered to ride in the ambulance — likely for moral support — but TMZ‘s source says “it wasn’t necessary.” It’s not clear what the man does for Mila Kunis but TMZ confirmed he has already made a full recovery.

Mila Kunis’ heroic and life-saving actions put her next to the likes of Harrison Ford, Patrick Dempsey and Ryan Gosling. All three hunky actors have recently pulled off life-saving feats.

The 28-year-old actress and Friends with Benefits star is currently battling an ongoing legal issue as her alleged stalker was arrested on May 4, 2012.

No word yet from Mila’s rep on her courageous and calm behavior.