Veep’s episode “Catherine” has Selina busy ignoring her daughter while turning everything into a political message and, like a true politician, trying to spin her way out of it. 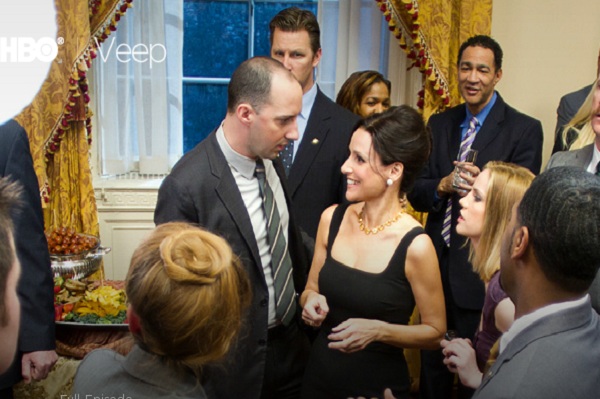 The genius of Veep is that it takes something as infuriating as political bureaucracy and incompetence — and the ripe-for-satire behavior of politicians who will do anything for a vote — and makes it funny. Genuinely, laugh-out-loud, funny. That’s a good thing. Satire is supposed to make us laugh.

Just as the old Radiohead song “Electioneering” proclaimed, politicians will stop at nothing to get votes:

I will stop at nothing

I trust I can rely on your vote

When I go forwards

and somewhere we will meet.”

It’s the going backwards part that hurts, especially in this episode of Veep. In a politician’s quest to gain, or keep, power someone must suffer. In this case, it’s Selina’s daughter, Catherine. This week’s episode title is “Catherine” and she is completely electioneered and basically forgotten by her Veep of a mom, Selina. Poor Catherine. Yet, to the series’ credit, it’s pretty funny.

This week’s episode, “Catherine” found Selina Meyer (VP) making it all about her, despite saying it was not all about her. She tried to squeeze in time to have lunch with her daughter, Catherine, visiting from college. (A funny moment happens when Catherine, in perpetual college mode, tries to make small-talk by asking, “Have you ever read Faulkner?”) The highlight of the episode is when the Veep stands in a closet proclaiming, “It’s not all about me,” while surrounded by larger-than-life campaign placards of her face. She does apologize to her daughter and promises to not request her staff of Yes-People to change the name of a hurricane ( that unfortunately has her name). She also wanted to get a dog but even getting a dog becomes a political object to be manipulated for her benefit in Selina’s world.

The fact of the matter is, when you’re the Vice President, it kind of is all about you. For better or worse. Your job demands it. The comedy comes in the deft manner Julia Louis-Dreyfus shows that Selina not only enjoys it, but maybe enjoys it a little too much. We know she should make time to have lunch with her daughter but the way she avoids it, in an almost off-handed manner and without really bothering about it, is somehow funny in this world. It shouldn’t be — but it is.

The jokes were fewer this episode, not as many laugh-out-loud moments — until the end. It’s an enjoyable show that’s always over much too quickly. Mike is still funny and still stuck in his retro world. (I get the Rubik’s Cube references now.) Mike is the old-school guy, dated. Jonah is still annoying as ever. One of the best lines of the episode came from Catherine: “Who let the guy with the police sketch face of a rapist tell us what to do?”

It’s a good show, that — who knows — could one day be great. The political plots (spin control on naming the right oil guy to her Clean Jobs taskforce and catty competitiveness with the First Lady) sometimes come across silly. Still, they’re funny. I don’t mind the well-meaning buffoonery. It’s comedic (and witty). Selina’s been in D.C. in politics for 20 years, she’s no dummy. Gary whispers “factoids” in her ear as if he were the “horse whisperer.” No, she’s not a “horse” one character corrects himself. This gets even funnier when Gary needs to whisper a factoid to Selina about her daughter’s new roommate and Selina snaps, “I don’t need a factoid about my daughter.” Then a few beats later, she’s forced to use it during a lull in conversation. There’s a sadness in Catherine that with the wrong direction could play just sad but instead with Tristram Shapeero’s direction (and Gray and Roche’s witty teleplay) — it doesn’t play woeful but funny.

The best thing about this HBO show is that unlike other HBO shows (Girls, for example) this show knows what it is. It’s not suffering an identity crisis. It’s political satire, pure and simple. That’s good. It allows us to take it for what it is, forgive its weaknesses, and relish in its strengths — namely, the characters and their witty banter.

Veep has an amazing cast who inhabit their characters completely. Not every moment is laugh-out-loud funny, like some shows, but it still delivers satire that we enjoy watching. Who doesn’t love seeing politicians skewered and going behind-the-scenes to the Veep’s experience at the White House? Even if the President never calls.