Dannielynn Birkhead — the daughter of the late Anna Nicole Smith and her former boyfriend, Larry Birkhead — made an appearance at the Kentucky Derby on Saturday in Louisville, Kentucky. How adorable is she? 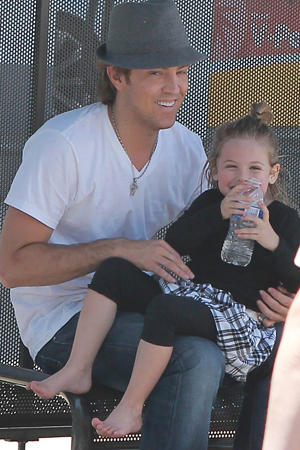 The late Anna Nicole Smith has one lasting legacy of her short life: Her adorable 6-year-old daughter, Dannielynn Birkhead. The lookalike youngster turned up at the Kentucky Derby with her father, Larry Birkhead. Dannielynn looked adorable in her floral dress and matching fascinator while daddy Birkhead kept it dapper in a seersucker suit with blue and white pinstripes.

The Kentucky Derby holds a special place in Larry’s heart: It’s where he first met future girlfriend Smith back in 2004.

He’s done a good job keeping Dannielynn out of the limelight since getting custody of her after Smith’s death in 2007. He fought a nasty court battle against lawyer Howard K. Stern for custody of the girl — Stern tried to get custody of Dannielynn, arguing that he was her father. DNA evidence later proved otherwise and Larry gained custody in late 2007.

Still, Larry doesn’t hold any ill will against Stern.

“Every story needs a villain and a hero, and I think Howard was made the villain,” he told Entertainment Tonight in 2011. “He happens to be a brilliant attorney when it comes down to it.”

Stern had compliments for Larry, too.

“[He is] doing an amazing job raising [Dannielynn],” he told ET.

As for Dannielynn, Larry said she’s smart and doing well in school. “Anybody that comes in contact with her talks about how bright and intelligent [she is] and how she leaves an impression,” he told the entertainment program.

“[Dannielynn] keeps me on my toes, because she’s very smart and she’s asked things already about her mom… She can walk by her picture and she’ll give a kiss to her mom in a photo album, or at Christmas, we were sitting at home and The Naked Gun came on with her mom in it, and I let her see an appropriate little clip of that, and she knew right away her mom was, you know, ‘There’s my mom. That’s Anna Nicole.'”

“My goal was always to keep [her late brother] Daniel and Anna in her mind and let her know who they were without overdoing it,” he added. “You have a responsibility to keep Anna’s memory alive.”

27 mins ago
by Louisa Ballhaus