Cameron Diaz explains how it’s one role she’s happy to put off, while Elizabeth Banks and Jennifer Lopez are embracing it with open arms, most of the time! 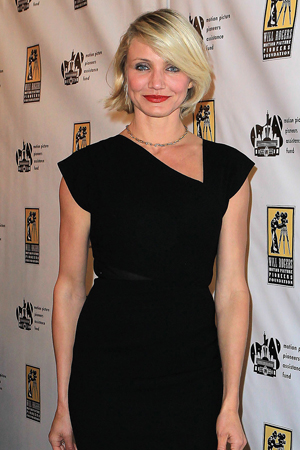 Cameron Diaz may be rocking a baby bump in the upcoming ensemble comedy What to Expect When You’re Expecting, but she is only doing so as a 39-year-old actress. She confesses that motherhood was supposed to be an early goal of hers.

“I thought I was going to be married and have two children by the time I was 21,” Diaz said in Redbook’s June issue. “I think I felt I had to model my life after my mother’s.”

What to Expect When You’re Expecting: Meet the mamas! >>

What changed her mind? “My career was starting to take off and there were still so many things I wanted to do. So that dream for me was shattered early on,” she explained. “After that I never put another timeline on anything in my life.”

Though Diaz is now happy to be putting off motherhood, the other actresses of the film are gushing about their familial role.

See all the posters for the film featuring Anna Kendrick, Jennifer Lopez and Elizabeth Banks >>

“I think the thing you always hear — but can’t really feel or believe — is how this little baby really does change your life,” said Elizabeth Banks. “When you have children, it’s the entire focus of your life, but my capacity for joy has been opened up in a way I never thought possible.”

Jennifer Lopez said her twins changed her life as well — momentarily, for the worst!

“I remember after the babies were born, about seven to 10 days in, I was like, ‘What is going on with me?'” she reflected. “I felt sad and depressed and thought the babies didn’t love me. I actually remember picking up the book [What to Expect When You’re Expecting] to try to see what was happening to me, and it said how you have this huge hormonal drop about seven to 10 days after you give birth. It’s called the ‘baby blues.’ But I just thought they didn’t like me!”