“The Old Gods and the New,” episode six in Season 2 of Game of Thrones doesn’t offer much that’s new: It’s still the same characters spinning their wheels in their quest to rule the Seven Kingdoms and take the Iron Throne. While still enjoyable, the series risks losing our interest if we can’t find even a tiny beacon of light in this dark world. 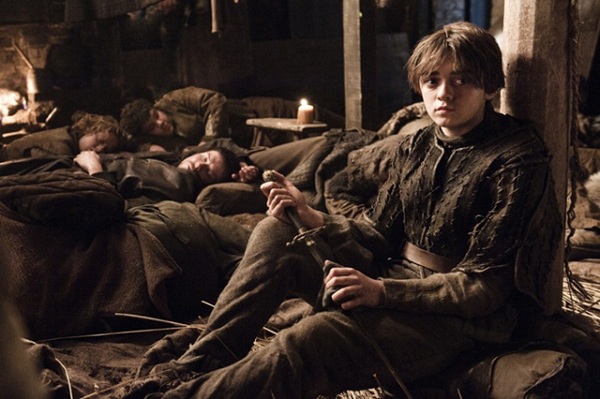 “The Old Gods and the New” is bookended with two female characters whose “children” are taken from them. Cersei’s daughter, Myrcella, is sent away by Tyrion on a small boat to safely hide in another kingdom. Cersei isn’t too thrilled with this. The episode ends with Dany, another former queen (if only in her mind, by way of her father and ancestry), has her dragon “children” taken from her. The baby dragons are stolen during her visit to Qarth. Westeros is in transition -– out with the old gods (and kings) and in with the new. This begs the question, who will be the new king?

The series is at its best when it rises above the video game-like quest for the Iron Throne. When moments of clever dialogue illuminate contemporary mores and shed light on human nature. Game of Thrones needs more of that and less empty, meaningless jockeying for position. Season two is more muddled than the first, although still good, but it could benefit from more focus. Starting with Tyrion (the always amazing Peter Dinklage). He’s the strongest character this season and we’d like to see more of him. The other potentially strong characters –- Robb and Jon Snow (as well as Khaleesi) have all been sidelined this season. This makes it difficult, as there’s really no one to root for.

Except for Arya. More on her in a moment.

So who will be king?

Stannis Baratheon (son of the “real” king) is the obvious choice, advancing with a demon at his beck and call. We didn’t see him this episode.

Robb Stark, the honorable claimant, is already “King of the North” and has no desire to sit on the Iron Throne. I really thought Robb would takeover the mantle that his father, hero Ned Stark, wore last season. So far, though, that hasn’t happened. His character remains surprisingly undeveloped, simply commanding armies and flirting with nurses (who seem to be possible spies). His mother, Catelyn, has seen more action this season.

Tyrion Lannister tries for reasonable sanity in the insane King’s Landing with a petulant, out of control psycho-brat for a king, King Joffrey. Tyrion schemes and plans in secret and with caution and reason to little avail.

Then there’s the bumbling Theon, disrespected and disliked.

The likable Jon Snow is presently marooned in the frozen tundra and pretty much out of the picture. At the moment, he does not seem concerned about the Iron Throne or Winterfell, but just resigned to his fate.

Last but not least is Khaleesi, the “dragon mother,” but this episode played her as more of a melodramatic zealot who’s out of touch with the real world. A once powerful character, she has been sidelined this season. She’s all talk and little action. It seems out of character, really. For a character who once ate a heart and nearly birthed dragons while engulfed in fire, it seems unlikely that she would be indecisive and need the counsel of a man.

There is also Arya, a tough scrapper, who could easily be queen.

Game of Thrones is imminently watchable and suspenseful, but it’s still trying to find its footing this season. The thrill of Thrones is that it calls back to another time, a quasi-historical medieval period when people had to survive through wits and cunning. Last season, we got up close and personal to several characters, but this season we are meandering down dark alleyways, unsure of where we stand, hiding out in castles, as the characters all wage war.

The only one to root for, at the moment, is Arya (the compelling Maisie Williams). Arya Stark still hides in the lion’s den that is Harranhal. (The irony is that Harranhal was captured by the Lannisters from House Whent and given to Slynt for capturing Arya’s father.) Arya reads and intercepts a raven message to Tywin about her home castle, Winterfell. When Arya tells her own personal assassin to take out the guard who’s going to reveal her identity, we are rooting for her. In a show that is decidedly adult, however, it feels kind of wrong to be rooting for a twelve or fourteen-year-old girl. It doesn’t seem right that once her father was beheaded, it all fell to her and almost the weight of the entire show rests on her. Did Littlefinger recognize her? Hm. It was dark in that castle, but he seems all-knowing doesn’t he?

Jon Snow meets a woman with whom he might fall in love. Their first date went something like this: Fight some “wildings” on the frozen tundra, take off parka hood of one wilding to discover a beautiful woman. Next, commence beheading. Thankfully, find you can’t behead a woman. Instead, chain her to you as a prisoner and march in sub-zero temps to sleep on a rock. Then be forced to cozy up for the night and tell her to “stop” flirting with you. Cue falling in love. Or maybe not. This is Game of Thrones after all and we have no idea what Ygritte’s up to.

The dumba** Theon manages to take Winterfell. He then kills the loyal guard in a botched beheading. He takes the witch-nanny to bed (even after calling her a “half-wit”) and it comes as a mild surprise that Osha didn’t slit his throat while he slept. Instead, she stole away with Bran, sneaking him to safety.

Robb doesn’t seem too concerned that Winterfell is under siege, sending others to secure it while he marches onward to King’s Landing, presumably, to do some beheading.

This episode’s violence was kind of brutal. The high point of the episode was when Tyrion slapped King Joffrey across the face. Now there’s some violence we can root for. Joffrey is an evil, crazed, psycho-king.

It’s safe to say that notions of charity, humanity, and civility aren’t exactly abundant in the Game of Thrones world. Compassion is out while dysfunction (and malfunction) combined with brute force rule the day. Pretty much like actual history. Still, wanting an evil character to get his due can’t be my primary motivation for watching. When Game of Thrones is at its best, it almost inadvertently comes up with words of wisdom, such as the Qarth merchant’s quotes about his road to wealth not being paved in purity. Or when Lannister asks Arya what caused her father’s death and she answers “loyalty.” Yet the show seems almost unaware of itself; unaware of its own need for a moral compass and for heroes.

It’s still fun, but we want it to reach the level of a television show and rise above a video game. To give us a narrative thread we can follow that has some meaning. It’s a superbly acted, well-written and well-directed series. Right now, the characters are churning, spinning their wheels, moving in place. It would be nice to see some light and goodness triumph in this dark place. Or at least make headway. We are going to need a lot more to root for than simply seeing Joffrey dethroned.