Cute country singer Jake Owen celebrated his wedding weekend in style: He was detained by cops before his Monday morning nuptials. What happened? 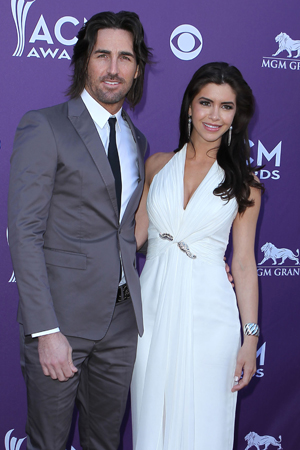 Country singer Jake Owen started out his wedding weekend with a bang on Saturday night — a sheriff detained the crooner in his hometown after he was spotted drunkenly dancing outside a Steak ‘n Shake restaurant.

It all started when the singer tweeted a photo of him and a pal downing a Corona.

“Whats the big deal about Cinco De Mayo. I’ve been drinking my a** off Everydayo of Mayo,” he tweeted. A few hours later, he posted a photo of himself in handcuffs.

“I was wearing an old man mask and the sheriff decided to rip me out of Steak And Shake and embarrass me in front of my family. You give a guy a gun and a badge and he thinks he’s John Wayne. I’m calling it a night. My mom cried. My Dad was embarrassed,” Owen tweeted, according to online reports. He wasn’t arrested and later deleted the tweets with an apology.

“Y’all I apologize. The IRC Sheriff was doing their job. I love hometown. I had too good of a time on Cinco de Mayo,” the singer wrote after he had some time to sober up. “I embarrassed myself and my family and most importantly the great people of my hometown. The Sheriffs were doing their jobs and I made an immature decision to announce it to the world. This is me talking. Not some puppet that is reciting what he ‘should’ say. I take full responsibility. Again, what’s done is done, but I am truly sorry.

“I want to publicly apologize again for bringing to light a situation that I overreacted to,” he added.

The 30-year-old showed maturity by apologizing and accepting responsibility. It’s a good thing, too — he’s now a married man.

“A best friend for life. I now have a wifey :)” Owen tweeted early Monday morning, along with a photo of him and new bride, Lacey Buchanan.

“My face hurts from smiling,” he added. “What a wonderful way to start the rest of my life.”

Why the sunrise ceremony? “That was my idea, because it’s symbolic of the dawn of a new day and starting our new life together,” Owen told People. “I’m looking forward to being a husband, someone his wife relies and leans on.”

The couple got engaged a couple of months ago when Owen decided to propose during one of his shows. “You’re probably wondering where your ring is, right?” Owen told his then-girlfriend before breaking out into his song “Don’t Think I Can’t Love You.”

“I just said I can’t buy you a big diamond ring or a big old house on the hill, but I promise you I’ll love you forever and ever and ever,” he crooned to her.

Owen later revealed why he decided to propose.

“When I was onstage, it just hit me how many of our family members and friends were at the show,” he said. “So I thought sharing that moment would mean a lot to everyone.”

We have to agree! Now, don’t go getting arrested again, Jake.