The usual celebrity crew was in Las Vegas for Floyd Mayweather’s fight against Miguel Cotto on Saturday night, including Justin Bieber. Wait, Bieber? Why was he there? 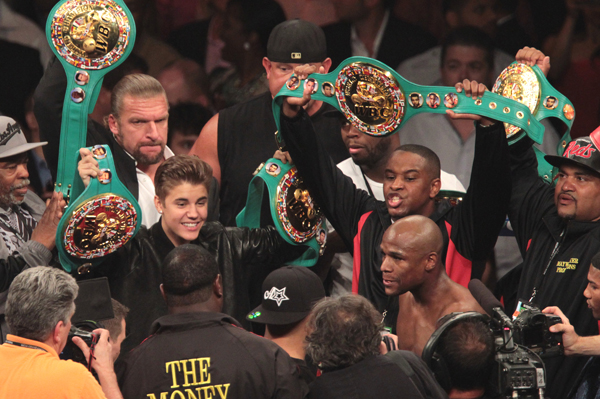 Floyd Mayweather had a bunch of celebrity pals on his “money team” during his win against Miguel Cotto on Saturday night in Las Vegas: 50 Cent, wrestler Triple-H, Lil Wayne… and Justin Bieber?

Yep, a lot of boxing fans were scratching their heads on that one. The Biebs is apparently a big Mayweather fan and helped the champ carry some of his belts into the ring.

Mayweather apparently appreciates the 18-year-old’s friendship. “@justinbieber keep up the great work and thanks for the support #TheMoneyTeam. Enjoy the fight,” he tweeted back. Afterward, Bieber congratulated his new BFF on his win. “@FloydMayweather Hard Work & Dedication. congrats champ. glad i could be a part of it.”

The “Boyfriend” singer had a big weekend in more ways than one: The video for the new single broke YouTube records for number of views — it racked up eight million within 24 hours and it’s now got well over 20 million. Not bad for a video that’s a complete rip off of an *NSYNC video.

Part of the video’s appeal is Bieber’s beautiful romantic interest. The brunette stunner was hand-picked by the singer for the video.

“They picked two girls based on the pictures, then they came and then we picked the best one who looked best on camera. It was kind of a group thing ’cause she was really beautiful and on camera it was this cool vibe,” Bieber said of choosing Rachel Barnes. “She looked kind of like Pocahontas.”

Don’t worry, Selena Gomez fans: Barnes won’t be moving in on Bieber — she got married last year and thinks that the young Hollywood couple is totally cute together.

“Justin and Selena are adorably inseparable and I, myself, am already married. I’m a Belieber, but he’s not my boyfriend,” she told TMZ over the weekend. “It’s been great to be a part of the Bieber madness… even if only for a song.”