Megan took hold of her destiny and Pete took hold of another man’s wife in a terrific installment of Mad Men. 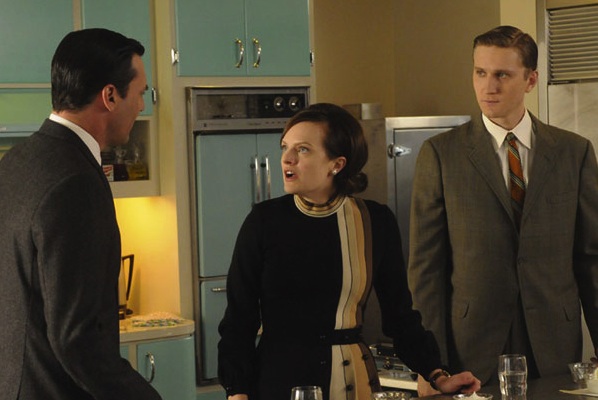 At the time he had begun to write the pilot of Mad Men (somewhere in the early 2000s), Matthew Weiner was already what almost anyone would deem successful. He and his wife had bought a six-figure home in Los Angeles’ Fairfax district. She was (and still is) an architect, and he was a writer and producer on Becker, an unambitious but successful CBS sitcom. Anyone who knows how hard it is to break into (or to sustain) a career in television would conclude that Weiner had, indeed, “made it.” Anyone would guess this was a satisfied man with little left to prove.

And yet, in interview after interview, Weiner has since reflected on that period as among the most dismal and unsatisfying of his life. Mad Men, he admits today, sprung from his own sobering recognition that, despite how skilled he had become in his highly-coveted job, it was one he was never excited, or even happy, to do.

“[Mad Men] was my mistress,” Weiner said in a 2010 interview with the Archive of American Television. “What I really wanted to do was a story about someone who was like me — who was 35 years old and had everything and was miserable.”

In Sunday night’s fantastic episode of Mad Men, our focus shifted away from Don’s unhappiness — which, by and large, has been something of a distant memory this season — and sharpened on the source of Megan’s private turmoil. Last week, her father hinted there was a part of Megan, a need, that had been quieted and tucked away. Now we know what it is: Megan Draper wants to be an actress.

On paper, this revelation seems trite and frivolous and routine — and on a lesser show it easily could have played that way. But after all of the season’s build-up of Megan’s innate skills as an ad prodigy, after all of the season’s focus on her intimacy with Don, Megan’s decision to leave SCDP and pursue her true passion infused “Lady Lazarus” with an elegiac quality and an aspirational one, simultaneously. Megan was leaving Don, but not really. She was finding herself, but not really. She was pursuing her passion and burning a bridge and wounding Don and healing herself and changing the dynamic of the office (and, likely, the dynamic of the series), all in one fell swoop.

Even Peggy’s evolution over the course of the episode — from anger at Megan’s disinterest in such a coveted position as SCDP wunderkind to open recognition that Mrs. Draper’s decision to follow her heart was, in fact, a “brave” one — was enough to raise another question, altogether: How many members of the SCDP crew can really call themselves brave? What passions have they left behind? What concessions have they made?

In an episode that carried so much change for Megan, it was Don’s response to it all — his measured, affectionate acceptance of his wife and of the death of their budding and electric professional partnership — that was truly absorbing. Where he once may have responded with anger or arrogance, Don displayed only a depth of feeling and a sense of calm, all as what he thought he knew to be true about his wife came crumbling down around him. Perhaps this is all fitting punishment for a man who has built so much of his own life on a lie.

Whatever his true feelings about Megan’s decision, Don’s behavior throughout “Lady Lazarus” showed us just how far he’s come from the man Matt Weiner first created. Megan might no longer be at the office, but she and Don will still come home to each other each night — and, with her independence and personal ambition intact, she likely won’t be the bitter, icy housewife he was married to last time around. Don knows Megan is what he needs, no matter whom she might want herself to be. Whatever she is or becomes, she seems more than enough for Don Draper.

(Viewers who complain that “not much happens” in Mad Men would be wise to take a look at “Lady Lazarus” and “At the Codfish Ball” and consider what this series is able to chart across the human heart in just two hours.)

While Don was capably dealing with his own unusual brand of heartbreak, Pete found himself wrapped up in the arms of another man’s wife and staving off a feeling of obsession. “Lady Lazarus” marked the second time this season that Pete has strayed outside of his marriage (not counting the high school girl he leered at in “Signal 30“), and Mr. Campbell’s storyline was, once again, thick with despair, self-loathing and resentment.

“Enjoy the memory,” Pete’s one-time mistress, Beth, urged him, as she tried to make it clear she never wanted to see him again. “Leave it alone. Fantasize about it.” But Pete’s fragile ego and chronic loneliness wouldn’t let him take no for an answer. Soon enough, he was back at Beth’s door, under the guise of needing to discuss insurance with her husband. Then, upon his first moment alone with her, Pete slipped Beth a hotel key and begged her to join him for the night.

Needless to say, she didn’t.

Mad Men may have begun as the story of a “miserable” 30-something man named Don Draper, but over the course of five seasons, its scope has clearly grown, shifted, evolved, and matured. This year, it seems, Matthew Weiner’s passion project — the one that finally brought him happiness and acclaim — is the story of how true love, and not the stuff invented to sell lingerie, has allowed Don Draper to manage or compartmentalize (or, perhaps, even to conquer) his misery.

Pete Campbell, however, seems to be destined for a far worse fate.