In an unprecedented $200 million opening weekend for the new action hero ensemble that has everyone from Scarlett Johansson to Robert Downey Jr. in tights, The Avengers is No. 1 in America and the world this weekend. 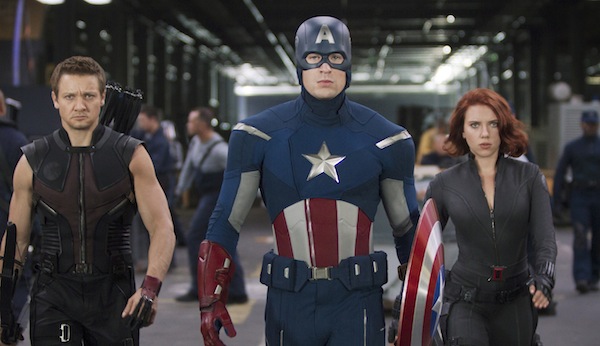 The team of super heroes — and super good looking people — which make up The Avengers has achieved greatness around the world today with its number one spot at the box office.

The Avengers beat previous record-holder Harry Potter and the Deathly Hallows: Part 2, which opened at $168.2 million, according to the Los Angeles Times. Not even The Hunger Games cracked that number. Well done, super heroes!

Coming in second (but who’s counting at this point), is Think Like a Man, according to Deadline Hollywood. Bringing in an estimated $8 million this weekend, the story of four friends who find out their girlfriends have been using a self-help book to decode their manly motivations has taken audiences by surprise.

The Hunger Games (there she is!) came in third place with an estimated $5.7 million in box office returns giving the post-apocalyptic thriller a few more coins in its giant purse.

Kids got their fill with The Pirates! Band of Misfits 3D which earned an estimated $5.4 million this weekend landing it at number four. The wacky animation is voiced by Hugh Grant, Salma Hayek and Jeremy Piven.

Coming in fifth with $5.2 million is The Lucky One, the Zac Efron love story about a soldier who goes looking for a girl whose photo he finds during combat. Nicholas Sparks pens. Ladies cry.

For those looking forward to the Judd Apatow-produced rom-com The Five-Year Engagement, many were disappointed. The film, starring Jason Segel and Emily Blunt, only earned $5.2 million bringing it in at number six this week.

Movie review: The Five-Year Engagement tries to get hitched >>

The Raven — the Edgar Allen Poe murder mystery — also disappointed in its second week at the box office earning only $2.6 million, bringing it in at number seven.

Movie review: Get your Goth on, John Cusack in The Raven >>

Safe, the crime-thriller starring Jason Statham, came in eighth with $2.5 million. The Disney nature film Chimpanzee came in ninth with $2.3 million and The Three Stooges held onto some fans with tenth place at $1.8 million.