Ike was forced to get his hands dirty in an effort to save Judi’s life during Friday night’s Magic City. 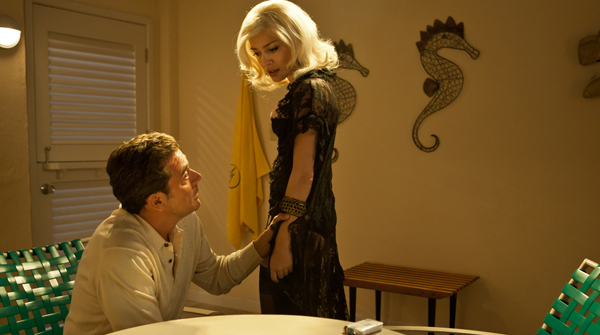 Following last week’s botched attempt to take the life of Judi Silver, Magic City‘s resident sociopath, Ben Diamond, remains undeterred in his efforts to clean up the fallout of Mike Strauss’s mysterious disappearance. Those efforts pushed into overdrive in Friday night’s “Suicide Blonde,” a rare episode that finally forced Ike to roll around in the mud with the thugs and gangsters who so often dictate the ups and downs of the Miramar Playa.

The episode opened with Ike waking from a nightmare that featured the murders of both Stevie and Judi at Ben’s hand. Prompted by this vision, Ike urged Judi to get the hell out of town, but (for reasons never credibly explained) Judi flatly rejected the advice. Nobody, not even the great Ike Evans, tells this headstrong hooker what to do.

Initially, Ike put his dim-bulb son, Stevie, in charge of looking after Judi’s safety, but that approach proved less than stellar. After correctly deducing that Stevie had been fooling around with Ben’s wife, Judi drowned herself in jealousy and booze and took off with the first john to give her the time of day. That john, unfortunately, was Jimmy Shoes, the assassin who put a bullet in the wrong hooker last week.

After an astute emergency call from Stevie (“I screwed up!”) alerted him that Judi had disappeared, Ike trailed Judi’s would-be killer out to the middle of nowhere and seemed ready and willing to negotiate with Jimmy Shoes. With Judi unconscious in Jimmy’s backseat, Ike offered Jimmy $20,000 (quite a hefty sum in 1959!) and a promise that, if returned to Ike’s custody, Judi would disappear forever. Jimmy seemed ready to accept the deal, but when Ike reached into his own pocket for his checkbook, no money emerged—only a fist to Jimmy’s face.

After pummeling his adversary to death, Ike coolly disposed of both Jimmy Shoes and the car he rode in on. For so long, viewers of Magic City have seen Ike solve or delay nearly every conflict with his wallet and a steely expression. It was nice to see he’s actually got a dangerous edge, as well.

The rest of the episode, unfortunately, was not nearly as entertaining. The series continues to drag out Ben’s non-responsiveness to the affair his wife has been having with Stevie, and, this week, the big-mouthed gangster was left with almost nothing to do but sit and wait for news from Jimmy Shoes. This is simply a waste of one of the series’ biggest names and what might have been one of its most dynamic characters.

Considering Ben’s impulsive and often violent behavior in previous episodes, it seems odd that he’s taken no actions against Stevie thus far. Ben’s passive attitude toward Ike’s eldest only underscores the likelihood that Magic City‘s writers are stalling to address that plotline in the season finale — and stalling is never satisfying.

Elsewhere in “Suicide Blonde,” Vera wrestled with the discovery that she is “tilted inside” and is very likely unable to have children. After inexplicably confiding this unfortunate turn of events to Mercedes (have these two women ever even shared a scene before?), Vera soon found herself consulting a voodoo practitioner to whom Mercedes’ mother used to turn for asthma treatment. The shaman, after doing a little bit of the expected hocus pocus, instructed Vera to make love to her husband under a full moon, so Vera soon sent away her kids and housekeeper and (with the help of Mr. Evans) helped knock the “weekly nude scene” off of the Starz checklist.

After nosing around about last week’s unfortunate execution-style killing, district attorney Klein finally pulled the trigger on the plan he had concocted way back in episode two: Keep Ike’s son, Danny (a rising star at law school), on deck as a potential asset. During a meeting with Klein and a few D.A. flunkies, Danny expressed his interest in “making a difference” and described himself as a “true believer.” After Danny’s dismissal, Klein — reading this fairly clichéd interview as good news for the D.A.’s office — told his buddies they finally had an “in” at the Miramar Hotel. But what, exactly, was stopping them from hosting this interview a few weeks ago, when the issue had first been raised?

Prior to his race to rescue Judi, Ike navigated some tricky meetings of his own, as Meg’s team of lawyers pressed him to reveal his associations and history in order to smooth the path to a co-ownership of the Miramar Playa. In the end, Ike took the hotel off the table and chided Meg’s negotiators for having bungled the deal with their questions. Seems Ike would rather deal with the devil he knows than reveal too much about himself to strangers.

Although its engagement with supporting cast members left plenty to be desired, “Suicide Blonde” was as strong a showcase for Ike Evans as Magic City has yet offered. Let’s hope that, next week, Ben, Vera, Stevie and Danny catch a little bit of Ike’s newfound swagger.