Justin Bieber just released the video for his new single “Boyfriend.” Why are we thinking of another Justin when we watch this?

Okay, Justin Bieber fans: You were probably still watching the Teletubbies when *NSYNC released the video for their song “Girlfriend,” so we’re going to give you a second to watch it. Go ahead, we’ll wait:

Now, can you really tell us that Bieber’s new video for “Boyfriend” isn’t a rip off of the original? Of course you can’t — it’s totally the same video, except the Justin in that video is a Timberlake instead of Bieber. Even the song is basically the same — just switch “girlfriend” with “boyfriend” and you’ve got the same song. Watch the “Boyfriend” video again to compare:

Oh, except *NSYNC didn’t incessantly use the word “swag” in the song. (Seriously, what does swag even mean?) Still, we know it’ll be a huge success with 85 billion views on YouTube before the end of the weekend. The biggest thing we can’t get over? The Biebs claims he’s never seen the video for “Girlfriend” or heard the song.

I haven’t seen it,” he told HollywoodLife.com. “Definitely, he was young and he did it. He was really amazing and had amazing music. I can’t say I would be upset if someone compared me to him, but I think my music is going in a completely different direction.”

Uh, right. Not buying it.

Anyway, how did the video turn out, in his opinion?

“I’m happy. I mean, I kind of switched it up from all the teasers. I wanted to do something that was a little more mature. My fans are all growing with me. It was something more mature and that all my fans would like,” he told the website. “I want people to know that my music is something I take really seriously. It’s not a joke. It’s not just mainstream pop music. I’ve been doing music since I was really little and I just want to show the world that it’s not a game.” 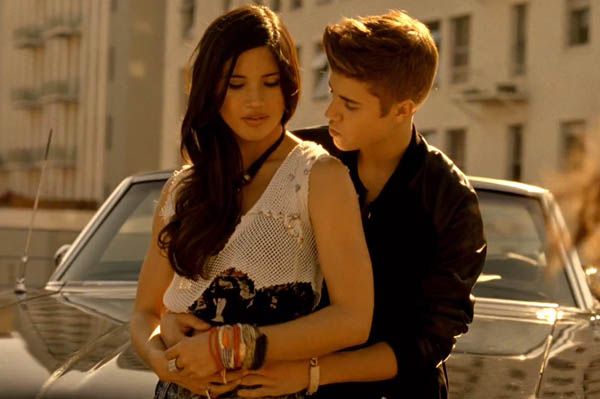 As for his next single off his upcoming album, Believe? He apparently thinks it sounds more like The Backstreet Boys.

“[M]y next single is better. I think it’s ‘As Long As You Love Me.’ It’s like mid-tempo. I just think it’s edgy. It’s something I can hear on the radio. It’s going to get stuck in people’s heads,” he said.

We’re quitting life if the video includes a mock audition with beautiful women and a choreographed chair dance. Just… no.