The steps to a clean break from your ex? For Demi Moore, one includes finally changing that Twitter handle to no longer bear his last name. What’d she pick? 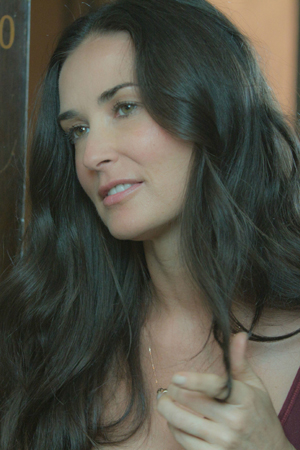 After a very public divorce, a stint in rehab and a lost biopic role, things are looking back up again for Demi Moore. She is serving as executive producer for Lifetime’s new interview series The Conversation with Amanda de Cadenet and she plays the role of Miley Cyrus’ mother in the upcoming comedy, LOL. She’s been busy, to say the least.

But today, she found time to finally change her Twitter handle.

The actress famously tweeted from the handle @MrsKutcher until this past January, which marked the beginning of her social media hiatus. She then jumped back on late last month to promote the new Lifetime series and started crowdsourcing ideas for her next username.

“Time for a change, twitter name change… any suggestions?” she tweeted in April. Piers Morgan even chimed in with the suggestion @mrsmorgan, but Demi jokingly replied, “I think that one is taken!”

Yesterday, she made the switch to her new handle, @JustDemi.

“So hard finding a name that was fun somewhat playful and available. So for now it will be @justdemi It could grow on me!” she announced on the social media platform. “Thanks everyone for your help in finding my new name!”

Didn’t get Demi to see your suggestion? No worries, another change may be on the horizon. She noted, “By the time I hit 5 mil followers I will have a new twit handle at least a temporary one.”