A New Jersey mom has been arrested for allegedly bringing her six-year-old into a tanning booth — a move even Snooki said was idiotic. 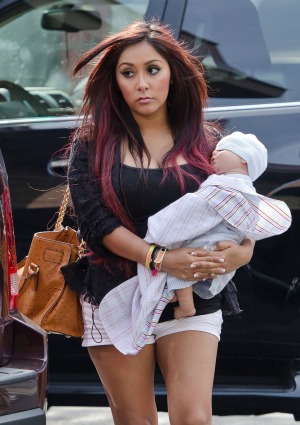 You’d think she was a woman after Snooki‘s own heart, but even the perpetually orange Jersey Shore star thinks tanorexic mom Patricia Krentcil is nuts.

Krentcil was arrested on child endangerment charges after her daughter showed up at school with burns later determined to have been caused by mom of the year taking her six-year-old into a tanning booth.

Well duh, we know that. We’re glad Snooki knows that too, since she’s pregnant with her first baby. But Krentcil? She’s totes in denial.

Snooki gets fierce over baby >>

“There’s somebody out there for my whole life that doesn’t like me because they are jealous, fat and they’re ugly,” the mom of two told a reporter.

Denying all charges, Krentcil told TMZ, “I would never, ever put my daughter in a tanning booth. Any mother who makes an accusation about me is not a mother because I’m a great mother — I would never do that to my child.”

The New Jersey mom — who lives in the appropriately named town of Nutley — said that whoever reported her for endangering her red-haired, fair-skinned daughter in such a way is full of lies.

“It’s all made up. I’m not dumb,” she told the New York Daily News.

“They’re making her out to be a monster,” agreed her husband Rich Krentcil.

Problematically, it was the Krentcil’s own daughter who told the school nurse that her severe burns came from entering the tanning booth with her mom.

In New Jersey, anyone younger than 14 years old is prohibited from visiting a tanning salon.

Krentcil pleaded not guilty and is free on $2,500 cash bond. She won’t be running into Snooki while tanning any time soon — her membership at Nutley’s City Tropics Tanning Salon has been revoked.