Disney kids are taking over The X Factor! One new judge is a former member of The Mickey Mouse Club and another rose to fame via The Disney Channel. 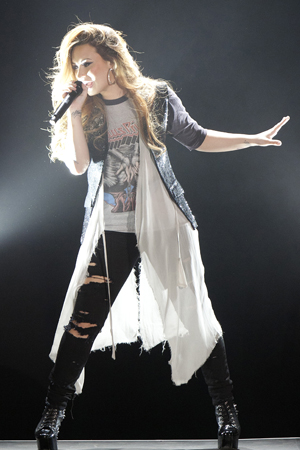 It looks like the search for the judges with The X Factor is over, and two pop sensations have come out on top. Two Disney kids will be replacing Nicole Scherzinger and Paula Abdul on the Fox talent competition.

According to E! News, both Britney Spears and Demi Lovato have offers in place and have agreed to the terms. The only thing left to do is sign on the dotted line!

The two seem to be a good fit for both the show and for each other, according to a close source’s reports to RadarOnline.

“Britney is the anchor of the new judging panel and that was Simon’s most important hire,” said the source. “Britney is extremely hopeful that Demi Lovato will become one of the judges because she truly admires her. Britney loves how open and honest Demi has been with her fans after she went to rehab last year. She thinks they have a lot in common and that they would have great chemistry on the show.”

They don’t only admire each other from afar, as their paths have crossed while out and about.

“Britney and Demi have met a few times very casually at Hollywood industry parties but those were very brief,” continued the source. “Demi went to one of Britney’s concerts in Anaheim in 2011 and met with her backstage. Once Demi officially signs her contract Simon will have the new judging panel over to his house for a celebration dinner. The second season of X Factor is going to be amazing.”