Megan Fox may have been replaced in the Transformers franchise, but that doesn’t mean she’s done with high-tech gadgets. She’s now the face of The Sharper Image! 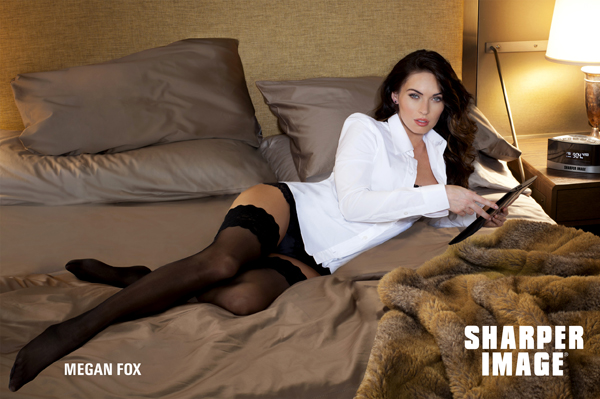 After having a way with morphing automobiles in both blockbuster films Transformers and Transformers: Revenge of the Fallen, Megan Fox has scored a new deal. The actress is now the new face of Sharper Image, the iconic brand best known for its innovative, tech-related products.

Sharper Image announced earlier today that the brand will roll out a new campaign starring Fox, and released the photo above as a hot sneak peek! And it looks like this new endorsement deal will definitely win favor with the brand’s targeted guy clientele, since the brunette bombshell is scantily clad atop bed sheets and alongside a few signature store gadgets.

One thing’s for certain: Megan looks great, and she knows it without having to see the actual campaign shots. She recently spoke about her photo shoot philosophy.

“I live well with my image, I cannot complain,” she explained back in March. “I hate taking pictures, I never watch them, otherwise I would have wanted to change everything,” she said of being on a photo shoot set. “I prefer not to see any and trust the photographer, who knows his job.”

We’re guessing that all campaign photos were shot a while ago, well before there was any baby bump to hide. The star is reportedly pregnant, but has yet to confirm the news.

Also, in conjunction with the upcoming campaign launch, Sharper Image will introduce a newly-designed website.

Catch Megan Fox in the upcoming comedy Friends With Kids and Judd Apatow’s This Is 40.