Alyson Hannigan is feeling a bit left out with all of the talk about Jessica Simpson and her huge baby girl, Maxwell Drew. Find out why the How I Met Your Mother star wants her props, too! 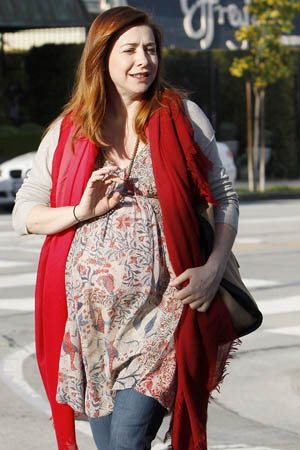 It’s no secret that we love us some Alyson Hannigan. The gorgeous red-headed star of How I Met Your Mother is the type of woman we’d like to be friends with, so it comes with some embarrassment that we admit we forgot she’s pregnant. However, she claims her baby belly is hard to miss.

“Congrats to Jessica Simpson! Does this mean I now have the biggest baby bump in Hollywood?” the American Reunion star tweeted after Simpson gave birth to daughter Maxwell Drew earlier this week. The blonde singer took up all of our attention, mostly because it felt like she was pregnant for about 85 months.

We totally thought Simpson looked huge; Hannigan, not so much. Apparently random people on the street think differently.

“The last couple of times I’ve been at stores, people have been like, ‘Oh you’re ready to pop, right?'” she joked in April. “I’m like, ‘Actually I have a couple more months.’ Somebody said, ‘You’re sure there’s not two?’ I keep asking my doctor the same thing.”

The red-headed comedian already has one child with husband Alexis Denisof — Satyana, 2.

“Oh, she’s super, super excited!” Hannigan told MSN.com of whether or not Satyana’s ready to be a big sister. “She is already a great big sister, and she’s very excited about the baby. She rubs lotion on my belly and talks to the baby, and it’s very sweet.”

The couple doesn’t have a nanny and manages to keep everything on schedule in their busy lives with a time-tested tool: a calendar.

“My husband is incredibly supportive, and that’s wonderful because we don’t have a nanny, so it’s just the two of us doing it,” she said. “It’s definitely hard to balance at times, but we make it work. We have a big chalkboard that’s divided into calendar dates, and that’s how we live. We’re like, ‘OK, let’s not over-schedule things.’ We still want to have enough time to have our family time. We just try to balance it as best we can. We have days where it’s like, ‘OK, that day wasn’t so balanced,’ but then we’ll make up for it by not having anything during the weekend or just having ‘us’ time.”

The baby may have a little more time before it gets here, but don’t expect her to reveal the sex beforehand.

“We do know what it is — we haven’t said yet, but we do know,” she said. Either way, the baby is super lucky!