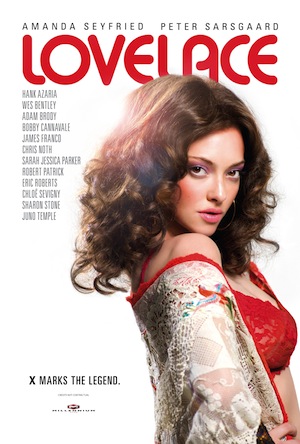 Photo: Amanda Seyfried on the set of Lovelace in L.A. >>

Before Lovelace was watched by every teenage boy in America, she was a confused, insecure working-class girl from the Bronx hoping to make something of her life. She never dreamed where her passions would take her.

Her life story is anything but boring, and when it came time to put this saga on screen, who could capture the vulnerability and sexiness of Linda Lovelace all rolled into one?

The casting world was all abuzz when sweet, girl-next-door with a golden voice Amanda Seyfried was picked to play Lovelace in the new biopic of the same name helmed by documentary filmmakers Rob Epstein and Jeffrey Friedman.

The newly-released poster shows a sexy, brunette Seyfried, one we haven’t seen in her recent action films — In Time where she played opposite Justin Timberlake in the sci-fi thriller and Gone where she played a girl misunderstood by her friends and family. Here, Seyfried embodies the complex character that often didn’t agree with the lifestyle she was leading.

There is no release date set for Lovelace.