The staff of Seaside Wellness tackled issues of immigration, gender identity disorder and parental boundaries in a tumultuous Private Practice. 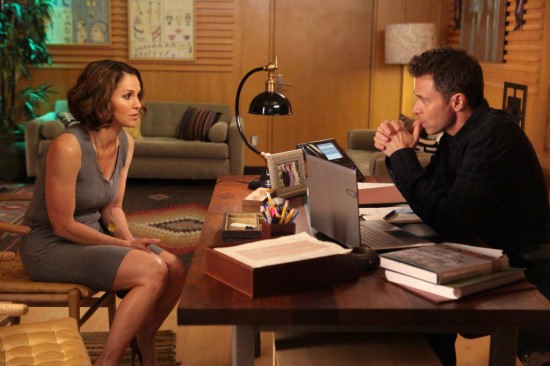 After having spent several episodes this season dealing with the egos and insecurities of its medical staff, it was nice to see Private Practice delve into some big issues this week — moral and emotional issues that effectively put patients before the doctors who serve them.

Sure, we still had to sit through Violet and Pete’s hemming and hawing about whether or not they should be together (they had sex this week, immediately after Violet suggested they should spend some time working through their problems), but there were enough other more interesting topics at play that their love life fortunately felt superfluous to the thrust of the hour.

At the beginning of “True Colors,” a pregnant woman named Reina was wheeled into the hospital and moaning in pain. She wasn’t about to give birth, however. The cause of her discomfort was ingestion of some sort of chocolate “folk medicine” designed to induce early pregnancy. Reina, you see, wanted to give birth to her child in the United States, before immigration officers sent her back to El Salvador, where her unborn child would almost surely grow up in poverty and ill health.

Pete, who had once helped establish a clinic in El Salvador, was intimately aware of the region’s terrible circumstances, and urged the staff to induce labor. But doing so, Addison pointed out, would potentially cause health risks for the baby that could outweigh the problems of a life in poverty. Additionally, Addison’s own newfound motherhood complicated her feelings on the matter. “If I induce her,” she confided in Violet, “then I’m going to feel responsible for a woman leaving her baby.”

Ultimately, the process did move forward and Reina’s child was born in the United States as INS officers waited just outside the door. Caroline was able to send the officers away, to allow Reina some time with her child, and Pete even proposed going to El Salvador with the new mom to help set up a solid foundation for her son. Violet, of course, was not down with this plan, accusing Pete of running away from the challenges they have yet to fix in their marriage. But the whole thing became a moot point by episode’s end as Reina and baby disappeared without a trace.

Elsewhere, Charlotte (usually one of the more pragmatic and adult members of this staff) was still wounded by Cooper’s accurate assessment that Erica, not Charlotte, is Mason’s mother. But she got over her hurt feelings soon enough, and worked to help curb Cooper’s frustrations that Mason isn’t listening to him or doing anything he asks.

Cooper’s complex feelings about his grieving son (“He’s a little jerk”) were further challenged by the arrival of Mel, a young girl who confided in Cooper that she knew in her heart that she is a boy but that her parents never understand. Together, and against the resistance of Mel’s mother, Cooper and Violet helped Mel sort out her feelings and diagnosed her with Gender Identity Disorder (GID).

“Your job is to protect her and love her and help her, no matter what,” Cooper told Mel’s mom. “But first, you have to try to understand her.”

Mel’s mother refused to hear or understand this advice, but Mason understood Mel’s situation immediately and was far from bothered by it. “Want to play?” was all Mason had to say to Mel to make her feel that she belongs. In the end, Mel’s parents came around to do whatever is needed for their child, and Cooper got a little bit closer to his own son.

Meanwhile, Sam bristled at the fact that he’s so often asked to help look after Henry, Addison’s new son. “I shouldn’t even be an option,” Sam complained. “I’m the ex.” He’s a real testament to selflessness, that guy.

“Stop trying to be the bad guy,” Jake told Sam. “It’s not really you.” Lately, though, it’s been pretty hard to tell.

Jake, to his credit, was busy being a good guy for Amelia, who has appointed him as her source of prenatal care, after her blow-up with Addison. Despite having discovered that her unborn child is to be born without a brain, Amelia was shocked last night to have felt what she was sure was a kick in her belly. “I can’t handle talking about this with anybody but you,” she told Jake. In the end, though, she still found the strength to sign the paperwork needed to release her child on the day of its birth.

“I can’t wait [to sign the papers],” she confided to Jake as she wept. “Once he’s born, I’m worried I won’t be strong enough.”

But what will the health of her baby be? Just like Amelia, we’ll have to wait to find out.