Omnipresent reality star Khloe Kardashian is explaining why she’s taking a break from her E! show with husband Lamar Odom. Is it to save their marriage? 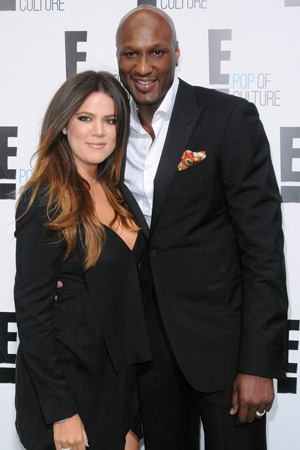 Fans of Khloe Kardashian and Lamar Odom were really concerned earlier this week when TMZ reported that the couple refused to negotiate with E! on another season of their hit reality show, Khloe and Lamar. The news was especially troubling given that the family just secured a $40-million deal with the network.

Does this mean that the couple is on their way toward divorce court, à la her older sister Kim Kardashian? Nope! The couple is just stepping back to reevaluate their lives after Odom’s tumultuous season with the Dallas Mavericks.

“We just wanted to prioritize a little,” the 27-year-old tells People in the new cover issue. “We just wanted a little pause. Part of being married is knowing when your husband needs your support.”

Odom had a rough transition to the Texas team after being traded from the L.A. Lakers in December. He missed a bunch of practices and was eventually demoted to their farm team before getting dropped. Odom might be traded at the end of the season, but there are no guarantees.

So, what are they going to do right now?

“We just want to take a little time off for Lamar to be with family time, kids, basketball, Olympics, you never know. We have a lot on our plate right now,” Khloe told The Hollywood Reporter earlier this week. They won’t be missing from reality television altogether, though: They’ll be making appearances on the new season of Keeping Up with the Kardashians.

Maybe Kim should take a page from her sister’s playbook and take a break for a while, too. We could really go without seeing the K family on our television screens for awhile.

“I’m a modern girl, but you should put your husband first,” she told People. “I like to think divorce is not an option.”