LeAnn Rimes and Eddie Cibrian have survived an entire year of being married — to each other! In celebration, the happy couple has renewed their vows and opted to share a photo of the special moment. 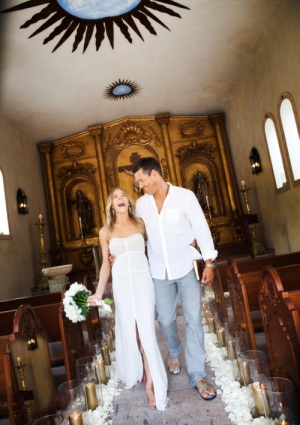 Congratulations are in order for LeAnn Rimes and Eddie Cibrian, who have celebrated their first anniversary as husband and wife! After being able to “endure” a whole year together, the pair opted to exchange vows once again and share their joy on Twitter.

LeAnn Rimes wants to join The X Factor too >>

After the ceremony last Friday the singer tweeted, “Renewed our vows today. It’s incredible to thank each other for the past year as husband and wife. Here’s to another great year!”

While speaking to a Twitter follower about love and relationships the 29-year-old asserted of their one-year marriage, “It’s LOVE when you can endure what we have.”

LeAnn Rimes and Eddie Cibrian spent much of their anniversary weekend seaside. A sampling of tweets from their romantic getaway read:

“Thank you all for the beautiful anniversary wishes! Woooo hoooo it’s been a year. Here’s to many, many more!!!”

“Eddie and I went climbing on the rocks in the ocean yesterday to see the thousands of crabs. I did not realize til now just how [bad] I kicked a rock with two of my toes…OUCH.”

“Nothing like running by two beautiful women on the beach who stop you to compliment you on your body. So NICE!!!!!”

Care to send a congratulatory wish to Eddie Cibrian and LeAnn Rimes on their vow renewal?