Why the pressure to lose weight right after pregnancy? Jenna Fischer of The Office tells moms to put off the task of taking off the pounds after popping out a kid. 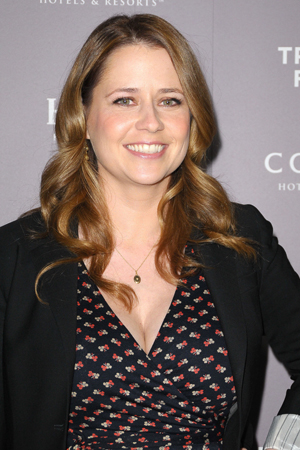 It’s an industry that acknowledges a job well done… except when it comes to motherhood, says Jenna Fischer of The Office. The pressure for women to take off the baby weight immediately after giving birth is downright ridiculous.

“I think it’s unnatural,” she told Celebuzz. “There’s so much pressure on you as a new mom that the last thing you need to have hanging over your head is some expectation of what your body is supposed to look like.”

She added, “I actually think that the scrutiny of new mothers’ bodies has gotten out of control.”

“Every new mother just gets a free pass. I’m actually angered by the ‘posing in a bikini six weeks after having my baby’ [trend].”

Fischer, who gave birth to her son last September, says the baby weight is worth keeping, after conquering such a feat in the delivery room.

“Who cares if our boobs are hanging low and we have a little more junk in the trunk? We created a human being, everybody. Let’s celebrate!”

Fischer may be griping about Hollywood’s treatment of moms, but she’s more lenient about the future of The Office. She admitted that the current season without Steve Carell has had “some peaks and valleys… that maybe weren’t as consistent before,” but Fischer has her eye on the bigger picture.

“We’ve kind of had to reinvent ourselves. In the greater scheme of what’s on TV, I still feel we’re one of the best things.”