Last night, The Voice revealed which singers would advance to next week’s big finale. And Tony Lucca made it, despite Christina’s constant protests. 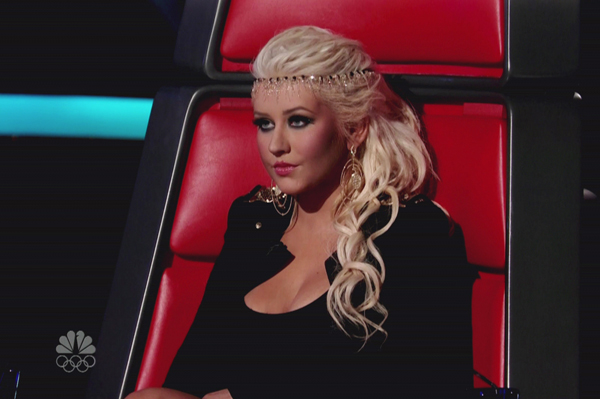 On last night’s semifinals of The Voice, only one contestant of each team could advance forward to compete in the finals. And for some reason, Christina Aguilera once again took a stand to promote another contestant over former Mickey Mouse Club buddy, Tony Lucca — even though neither are even on her team.

Lucca performed The Heavy’s “How Do You Like Me Now?” on Monday night in an attempt to earn favor from America’s voting audience and his own coach, Adam Levine. Just before the coaches submitted their scores, Aguilera chimed in to promote Tony’s direct team competitor.

“I just encourage Adam to really look at you, and I know the obvious predictable choice for Adam would be swayed towards Tony because of their vibe,” she said. “But I’m telling you, take a look at Katrina Parker because she’s a star.”

But Levine went against Aguilera’s advice and gave Lucca some extra love in the vote, and he has now moved on to the finals round — no thanks to Christina, who also called him “one-dimensional” in an earlier episode. But looking back even further, he noted that she has no reason to help him out anyway.

“We weren’t really friends on the show,” Lucca revealed to The Hollywood Reporter of their days as Mouseketeers together. “She was 12 and I was 17. So at that age, there were the older kids and the younger kids. We had a wonderful working relationship — there were music numbers that we did where I would sing background for her, and there were dance numbers and all that kind of stuff.”

But he doesn’t excuse her baffling behavior so easily.

“I don’t disagree with her suggestion that Adam consider us both… but of the four coaches, especially at this point in the game, it doesn’t seem like anyone is trying to manipulate or steer anyone else’s tough decisions, so for her to do that it seemed a little out of place. Now I’m just more confused than anything.”