Ike engaged the district attorney in a battle of wits, a robbery rocked the Miramar and a murder plot went awry in the latest Magic City. 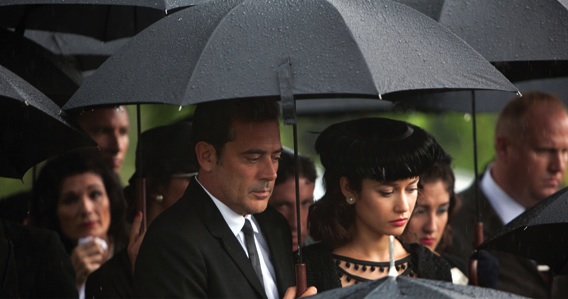 Previously on Magic City, the body of murdered union lawyer Mike Strauss bubbled up at an inconvenient time for hotel honcho Ike and friends — not that there’s ever really a good time for dead bodies, even on a show such as this.

It should be no surprise, then, that “Atonement” dealt largely with the fallout from the re-emergence of that pesky corpse. The episode opened with a proper funeral for the newly recovered Mr. Strauss, as grieving friends spoke shakily about the man’s integrity and tenacity — the two qualities that, as we and Ike are aware, were the very ones that landed Mike in a pine box.

Then, in a sequence that seemed much too melodramatic to have even a passing resemblance to reality, Mike’s corpse was remanded, mid-funeral, by the office of district attorney Jack Klein. For all that we’ve gathered about Mr. Strauss, he seemed like a pretty decent guy. Were D.A. Klein’s theatrics really necessary? Does this man so badly need to get under Ike’s skin that it’s worth upsetting an already-grieving family? Is he that bored on the job?

Apparently, yes. And Ike Evans doesn’t take that kind of crap lying down. In no time at all, he rounded up a reporter from the Herald to shine a spotlight on the district attorney and his bullish acquisition of the deceased. “Be sure to ask the junior crime fighter here what more he can wring out of a twice-autopsied, three-week old corpse,” Ike requested of his reporter buddy, with a smirk. With the heat turned up under both of these powerful men, Ike talked some trash to Strauss, Strauss talked some trash back at Ike, and both of them managed to do it without breaking a sweat. The game was afoot.

At the end of it all, though, Klein proved to be all bark and no bite. With one quick visit to his bookie pal, Ike ensured that the district attorney’s chief of staff soon found himself drowning in debt — a debt Ike agreed to erase in exchange for the chief of staff putting pressure on his boss to release Strauss’ body.

Money talks on Magic City, and Ike got exactly what he wanted. At the close of the hour, Strauss was definitively laid to rest during a funeral service set to a curiously anachronistic cover of Elvis Presley’s “Don’t Be Cruel.”

Elsewhere in the episode, a series of robberies continued to plague the Miramar Playa, and Danny soon found himself the unfortunate victim of a cold-cocking by a dark figure in the night. Yes, folks, just when it seemed Danny (who, as he is still oblivious to Ike’s shady lifestyle, has got to be the most unobservant aspiring attorney in the history of the legal system) couldn’t become a less-interesting character, he spent most of “Atonement” unconscious in the hospital.

Prior to that, though, he almost got to see Mercedes naked. When are we going to get to learn something about this kid beyond the fact that he’s got a thing for young, Latina housekeepers and a blind eye for crime?

By the way, the thief who knocked Danny unconscious now has possession of those risqué photos of Stevie and Lily — you know, the photos Lily had asked Stevie to burn so her homicidal husband wouldn’t find them. So, you can kind of guess where this is going.

Not that Stevie is all that single-minded about pursuing Lily, anyway. This week, with Lily put under house arrest by her increasingly inquisitive husband, Stevie’s legendary libido was directed towards Judi, Magic City‘s hooker with a heart of gold. Luckily for Judi, while she was off the clock and between the sheets with young Mr. Evans, Ben had chosen that moment to send a hitman to the bar to kill her, since she’s still a loose end in the Mike Strauss debacle.

Judi’s good fortune turned out to be another call girl’s worst nightmare, however, as the assassin (named Jimmy Shoes, since we only see his sweet kicks) mistook an innocent bystander for Judi and put a bullet in the wrong hooker. What a mess.

Upon hearing news of the misdirected murder, Ike made his way to Ben and told the seasoned gangster not to touch Judi. Ben, being the lovable egotist that he is, likened himself to God (for the second time in one hour!) and warned Ike to shut his mouth and stay out of the way. Then he suggested his lust for blood could be bought off.

“Again, you come to me for a favor,” Ben said with a sneer, “and again, you offer me nothing in exchange. What’s my incentive?”

In exchange for Judi’s protection, Ike agreed to fork over 15 percent of the income from every one of the Miramar Playa’s shops. Will that be enough to satiate Ben’s appetite? Somehow, I think not. Judi might want to hop a boat out of town.