Carrie Underwood and some of country music’s finest have an apology awaiting them if they’re ready to listen. Eric Church, one of their own, is doing his best to make amends after hurling insults in Rolling Stone. 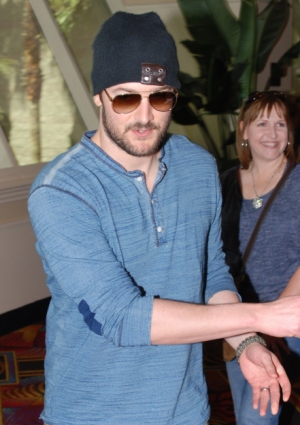 Eric Church is sincerely hoping Carrie Underwood and the rest of the country music community are big on forgiveness. The singer, who insulted many of the genre’s biggest names during a recent interview with Rolling Stone, is now apologizing for the way things appeared.

Can Carrie Underwood, Miranda Lambert and others forgive the singer for venting about reality television singing competitions? “Honestly, if Blake Shelton and Cee Lo Green f*****g turn around in a red chair, you got a deal? That’s crazy. I don’t know what would make an artist do that. You’re not an artist.”

Underwood and Lambert duke it out for CMT Awards >>

Attempting to make amends the 34-year-old said Tuesday, “The comment I made to Rolling Stone was part of a larger commentary on these types of reality television shows and the perception they create, not the artists involved with the shows themselves. The shows make it appear that artists can shortcut their way to success.”

“There are a lot of artists due to their own perseverance that have gone on to be successful after appearing on these shows, but the real obstacles come after the cameras stop rolling,” Church went on to say to Us Weekly. “Every artist has to follow up television appearances with dedication towards their craft, but these shows tend to gloss over that part and make it seem like you can be ordained into stardom. I have a problem with those perceived shortcuts, not just in the music industry.”

Carrie Underwood: You can’t be afraid to sound dumb >>

Wrapping his apology to Carrie Underwood and the country community at large he concluded, “Many people have come to think they can just wake up and have things handed to them. I have a lot of respect for what artists like Carrie Underwood, Kelly Clarkson and my friend Miranda Lambert have gone on to accomplish.”

“This piece was never intended to tear down any individual and I apologize to anybody I offended in trying to shed light on this issue. I am grateful for all of the artists and fans that have supported me along my journey and certainly did not mean for my comments to undermine their talent and achievements.”

Should Carrie Underwood and other country stars forgive Eric Church?