Khloe Kardashian and Lamar Odom took to the microphones to clarify reports that they’re canceling their spinoff reality show — sort of. 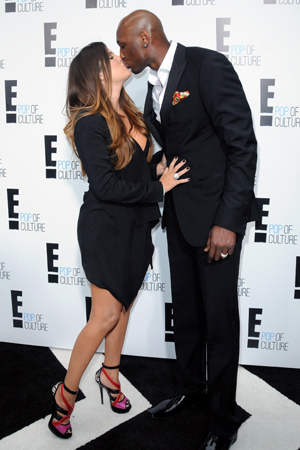 It’s true — Khloe & Lamar won’t be filming a third season this summer. Not yet, at least. The couple confirmed that they’re putting their reality spinoff on hold for a while.

“Our show is not canceled,” Khloe Kardashian said at NBCUniversal’s upfront presentations, according to The Hollywood Reporter. “Lamar and I have just chosen to take a break this summer. I feel like we’ve been on a whirlwind and doing back-to-back shows.”

She added, “We just want to take a little time off for Lamar to be with family time, kids, basketball, Olympics, you never know. We have a lot on our plate right now.”

Who can blame them? It’s been a rough year for Lamar Odom in particular, who is no longer with the Dallas Mavericks basketball team. Even more so, one of his cousins was shot and killed and Odom was a passenger in an SUV involved in an accident that killed a teenage cyclist.

“I think the issue at hand is we just want to be happy,” Lamar said. “So, we’ll take our time and we’ll get back to it when it’s time.”

Mark Cuban glad the Mavericks are done with Lamar Odom >>

You won’t miss them too much, however. E! did confirm to THR that the couple will appear on the upcoming seasons of Keeping Up with the Kardashians. Sources also told THR that the two just needed a break, as they were shooting both their own series and Keeping Up simultaneously.

No return date for Khloe & Lamar has been announced, as sources say it will depend on Lamar’s basketball and overall schedule.