Screenwriter Rosamund Lupton burst onto the writing scene with her debut novel Sister. Haunting and chilling, it followed the story of Beatrice after the body of her younger sister, Tess, is found in a building in Hyde Park, London. Written as a letter to Tess, the book recounts Beatrice’s search for her sister’s murderer. Now, Rosamund Lupton is back with her second book, Afterwards, about a school fire and a mother’s search for the person who tried to kill her daughter. We stayed up late into the night reading this shocking thriller, which is why it’s our Red Hot Book of the Week.

Rosamund Lupton is an amazing literary talent, combining beautiful, lyrical prose with suspenseful stories designed to keep readers hooked from the very first page. She dazzled readers with her debut 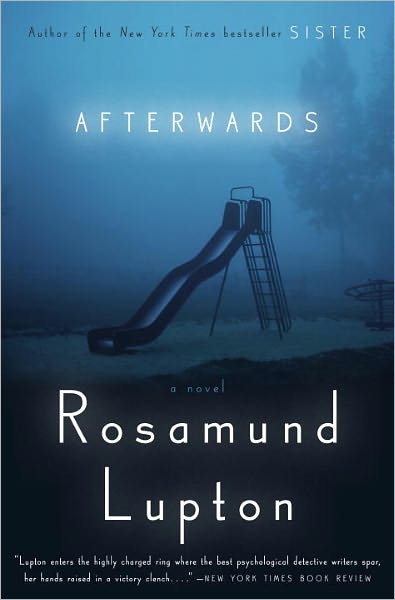 novel Sister and her recently released follow-up, Afterwards, lives up to that promise. Centered around the theme of a mother’s love, the novel explores the mother-daughter bond while also delivering a compulsively-readable storyline.

When Grace spies a fire engulfing Sidley House School, the private school her son, Adam, attends and her daughter, Jenny, is an assistant teacher at, she runs into the burning building. She knows Adam is safe, but Jenny is supposed to be on the third floor of the school, working as a nurse. Grace finds her daughter, but then blacks out. The next thing she knows, she is waking up at the hospital and staring down at her body. When the doctor informs her husband that she is in a coma and is brain dead, Grace knows she is some sort of spirit.

Grace finds Jenny, also a spirit, and together they are able to roam the halls of the hospital. Though they cannot interact with the physical world, they can eavesdrop on conversations and try to understand what happened at the school. Grace’s sister-in-law, Sarah, is a police officer, and though she has been explicitly told not to investigate the case, she can’t help but look into what happened. When Grace learns that the fire was set deliberately and that Jenny may have been a target, she begins to shadow Sarah to learn all she can and try to figure out why someone wanted to hurt her little girl.

As Grace does everything she can to protect Jenny from the truth about the fire and about how bad their injuries are, new challenges pop up to make her job even more difficult. As the police pursue the wrong suspect, Grace and Sarah must do everything they can to clear the name of the innocent party while still following all the leads they have. Only Grace can uncover what happened at Sidley House School that fateful day, and she must do so before the culprit returns to finish the job he or she started — murdering Jenny.