Jessica Simpson’s little sister is head-over-heels for the new addition in the family. Read on to find out what she has to say about becoming an auntie! 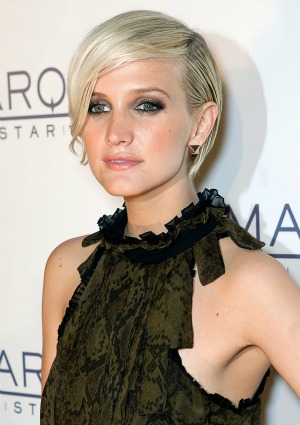 Jessica Simpson finally had that baby, and her little sister Ashlee Simpson couldn’t be more thrilled to be an auntie!

“Bronx and I are in love with Maxwell already!” Ashlee told People. “Jessica has wanted to be a mom since we were little girls and I couldn’t be more excited for her and Eric!”

Ashlee was spotted earlier this morning entering the hospital along with the rest of the Simpson clan, including patriarch Joe Simpson, mom Tina Simpson and the family of Jessica’s fiancé, Eric Johnson.

5 Mommy stars whose style we love >>

Jessica’s little sis is no stranger to the baby game. She has her own, 3-year-old Bronx Mowgli, with her ex-husband Pete Wentz of Fallout Boy. The couple wed when she was pregnant with the oddly-named child and separated in February 2011 amidst speculation that he worked too much and she partied too hard.

And if you thought Beyoncé splashed out for her birthing suite at ultra-swank New York City hospital, check out Jessica’s baby digs. Maxwell Drew was born in a private birthing suite at Los Angeles’ hospital to the stars, Cedars-Sinai, which runs a cool $3,784 a day — more than the $3,200 Beyoncé spent. For that you get three bedrooms and two baths, enough for the whole family to shack up with you and enjoy the miracle of life, as well as flat screen televisions, mani-pedis, muffin baskets and juice, and a private dinner for mom and dad post-labor.

It all sounds quite posh for a simple Texas gal, no?