Jessica Simpson named her daughter Maxwell Drew Johnson. Quite the name for a baby girl, right? Well, there’s a reason behind the name. Find out why she picked a boy’s name for her first daughter. 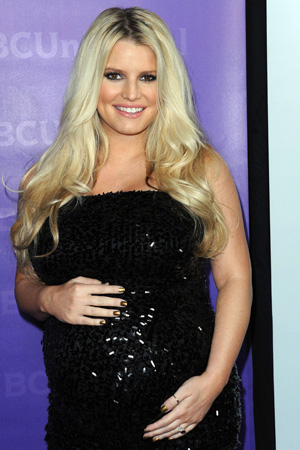 “Eric and I are elated to announce the birth of our baby girl, Maxwell Drew Johnson,” Simpson announced on her official website. “We are grateful for all the love, support and prayers we have received. This has been the greatest experience of our lives!!”

“Jessica Simpson should have named her daughter Maggie,” one tweeter wrote, referring to the cartoon baby on The Simpsons.

We actually really love the name, though we’ve always liked names that range outside the ordinary. It got us thinking, though: Which other celebrity baby names have special meanings?

Jessica Simpson and other celebrities who popped this year >>

Beyoncé and Jay-Z haven’t explained exactly why they named their first daughter Blue Ivy Carter, but there has been plenty of speculation. Some think it’s an homage to Jay-Z’s beloved Yankees — he raps “You should know I bleed blue,” in his song “Empire State of Mind.” People also reported that Ivy is derived from the Roman numbers IV, or four. The number has a special significance for the couple.

Of course, others put a more sinister connotation on the name, claiming it is in honor of the couple’s purported ties to the Illuminati. “I.V.Y. = Illuminati’s Very Youngest B.L.U.E. = Born Living Under Evil. Blue Ivy spelt backwords [sic] (Eulb Yvi) = Latin for ‘Lucifers Daughter,'” wrote Twitter user Katt Williams Parody after her birth.

Mariah Carey and Nick Cannon’s two bundles of joy — otherwise known as dembabies — just celebrated their first birthday. The pair — Moroccan Scott and Monroe — both hold special significance to the couple. Moroccan comes from the top level of Carey’s NYC apartment, The Moroccan Room. Monroe comes from Marilyn Monroe — and she doesn’t have a middle name because Carey doesn’t have one.

“I’m in the happiest place I’ve ever been in my life. I never had more amazing things happening. I am humbled by God’s Favor!!” Cannon tweeted after his kids’ birth.

James Van Der Beek went simple and old school when it came to naming his second child with wife Kimberly, Joshua. The name is said to have special family significance to the couple.
“It’s easy to find happiness when your child is laughing,” Kimberley Van Der Beek wrote in her People.com blog. “But when you can find it after a day of colic, teething and no time to shave your legs, that’s when you know you’re in for an enjoyable journey of love and appreciation.”

The former Dawson’s Creek actor is pretty happy to be a dad times two as well.

“If you could bottle up and distribute this feeling, I swear there’d be no more war. #fatherhood,” he tweeted. Awww!

What is your favorite weird celebrity baby name?