Hair, nails, makeup — was Beyoncé prepping for a photo shoot? Nope, just childbirth. The pop star went all out to glam up for the arrival of Blue Ivy. 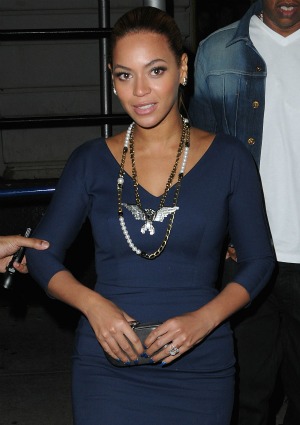 The first most photographed day of a woman’s life is probably her wedding. The second is the day she has a baby. Beyoncé, savvy as she is, made sure she looked her best when baby Blue Ivy came into the world — and girlfriend went all out.

“I did have a fresh eyebrow wax,” People‘s Most Beautiful Woman in the World revealed to the mag.

“I got my nails done, I got my feet done, had my hair done and I had my little lip gloss,” Beyoncé said.

Of course, in the midst of all that pushing she didn’t feel like a glammed up pop star.

“I didn’t feel that I looked beautiful during birth, but who does?” she said. “After being pumped with all those fluids and gaining so much weight… I barely recognized myself.”

“But after many hours of labor, I could care less about anything but my child. I didn’t care how I looked, I felt more powerful than I’ve ever felt in my life.”

“I felt connected to my body. I felt like I knew my purpose in the world.”

But still, a little lip gloss never hurt anyone, right?

Beyoncé also talked about how she lost the baby weight — and it wasn’t because she faked her pregnancy, it was a combo of breastfeeding and hard work.

“I lost most of my weight from breastfeeding and I encourage women to do it; It’s just so good for the baby and good for yourself,” she said, explaining she breastfed Blue for ten weeks.

A month after giving birth, she said, she went back onto a strict diet and exercise routine. “I counted calories. I worked out maybe three to four times a week,” she shared. “I did a lot of walking in the beginning and now I’m running. But I had to work my way up. I couldn’t just go right from being pregnant to running.”

“I’m proud that my waist came back so fast. I’m proud of that and happy, but that was mostly from the breastfeeding,” she said — and now she is only “three to four pounds” from her pre-pregnancy weight, but more curvaceous than ever.

“My hormones are still in my body. Your body produces the hormones that make your body soft,” she said. “It’s just magical. It makes me so proud to be a woman because it’s just unexplainable what happens to your body — it’s incredible.”

Read the rest of Beyoncé’s interview in the new issue of People, available on newsstands now.