The Five-Year Engagement actor Jason Segel recently revealed that he’d love to co-star with Secretary of State Hillary Clinton in a comedy. What does she have to say about it? You won’t believe her demands! 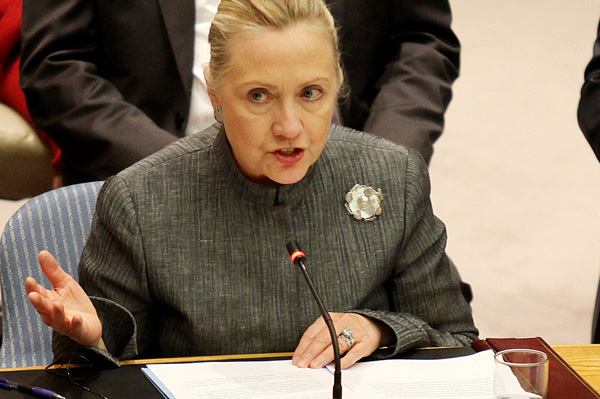 Does Hillary Clinton have a future in comedy after she ends her run as Secretary of State? Maybe, if Jason Segel has his way. The Five-Year Engagement jokester mentioned that he’d love to cast the 64-year-old politician in a future comedy.

“I just feel like she would be good at comedy,” Segel told US Weekly in March. “I think you can feel it from a mile away.”

Sadly it won’t be happening anytime soon: Clinton actually caught wind of Segel’s plans and sent him another proposal. “I was delighted to read about your interest in sharing the big screen with me,” Clinton (or more likely, a staffer) wrote in an official letter to the actor. “As you can imagine, I am a little occupied at the moment, but perhaps someday I can help you forget Sarah Marshall… again. My only condition is that there be Muppets involved, and that is non-negotiable. In the meantime, you have my best wishes for continued success with your career.”

We feel good that someone with such a sense of humor is working on our side. Oh, and this isn’t the first time “Hillz” has weighed in on a pop culture references: In March, she submitted her own version of the “Texts from Hillary” meme to the official Tumblr account.

“ROFL @ ur tumblr! G2g — scrunchie time. Ttyl?…” she wrote on the photo of her texting in sunglasses.

Segel has a thing for Hillary, it seems — he told Jimmy Fallon last week that he tells fans that Clinton is the yet-unnamed mother on his hit CBS comedy, How I Met Your Mother.

We’d love to see Hillary Clinton in a movie. Which politicians would you like to see on the big screen?