Kate Klise is an author well-known in the world of teen novels, and now she’s about to make a splash on the adult scene as well. Her adult debut In the Bag is a fun romance about finding love in the most random of ways — through a mix-up at the airport baggage claim. The book is actually based on a note Kate once found in her own bag. Readers will love the breezy nature of this book and will stay up late to discover whether these characters find love, which makes it a must-read for us.

When Andrew Nelson accidentally spills his glass of wine on a fellow passenger on a flight from Chicago to Paris, he is mortified. It’s not exactly the best way to meet someone, and this passenger is something 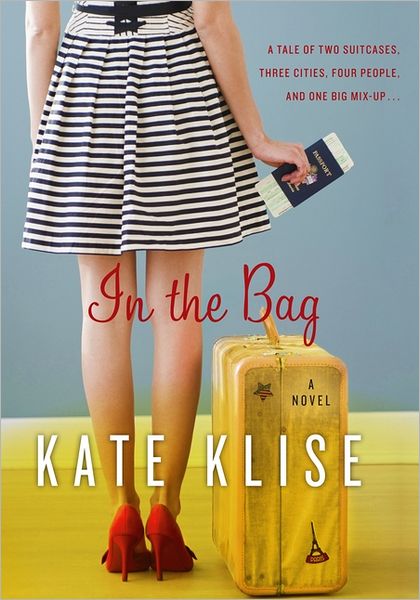 else — beautiful and completely out of his league. He spends the rest of the flight staring at this gorgeous woman, and when it’s time to deplane, he slips a note into her carry-on bag. Andrew sincerely hopes she’ll accept his apology, as she’s one of the most stunning women he’s ever seen. But for Daisy Sprinkle, a single mom with absolutely no time for such trivial things as dating, Andrew’s note is just another in a series of frustrating mishaps that have characterized her trip so far. First, he spilled wine on her, and then her daughter, Coco, has no bag when they land in Paris, and they’re left with someone else’s old duffel.

Coco is very upset when she discovers she has absolutely nothing to wear in the City of Lights — after all, she had enough issues at home. She didn’t realize they would follow her across the Atlantic Ocean. The entire reason she is in Paris is that she didn’t have a date to her prom, though now she isn’t sure that skipping the event was the best idea. While Coco grapples with her hasty decision, she wonders who has her bag, and whether they have gone through it and found the old underwear her mother made her pack.

When Coco receives a random email from a guy in Spain, she’s ecstatic yet completely embarrassed. Webb Nelson, the sender, claims to have Coco’s bag — her most gorgeous dresses, but also her ratty, gray underwear. As Coco emails back and forth with Webb, she realizes that he’s not the crazy guy she originally thought he was. In fact, he’s kind of sweet… is it possible she’s falling for him? In the Bag brings together modern day conveniences (and inconveniences, as the case may be) with two very sweet love stories that are sure to excite any fan of women’s fiction and romance.

Must-read: All Woman and Springtime by Brandon W. Jones
Must-read: A Wedding in Haiti by Julia Alvarez
Must-read: Objects of My Affection by Jill Smolinski