Rick Santorum got all starstruck on Saturday night when he spotted actress Lindsay Lohan at the White House Correspondents Dinner. Did he get her autograph, or curse her out? 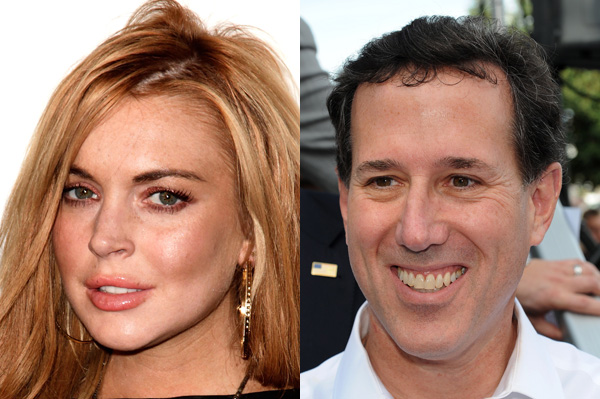 Is Rick Santorum thinking about going Hollywood now that he’s done with his run for president? Maybe, judging from his odd fan boy interaction with Lindsay Lohan at the White House Correspondents Dinner this weekend in Washington D.C.

According to TMZ, Santorum approached the table of Fox News anchor Greta Van Susteren for a photo opp during the dinner’s social time. He then asked if he could take a photo of Lohan — yes, just her. The probation-free actress smiled and obliged.

This is very surprising considering that Santorum loved to blast “liberal Hollywood” for supporting everything that President Barack Obama says and does. Still, taking a photo of Lohan and not with her means he’s still acutely aware of the potential political repercussions of such a photo.

It didn’t work — photographers snapped him smiling and chatting with Lohan.

“America is suffering from a pandemic of pornography. It contributes to misogyny and violence against women. It is a contributing factor to prostitution and sex trafficking,” he said in March. “While the Obama Department of Justice seems to favor pornographers over children and families, that will change under a Santorum administration.”

We won’t be seeing that in the next four years, but who knows about the future.

As for that photo he took of Lohan? Santorum didn’t “remember” it just a few minutes later when confronted by TMZ cameras.

“I took a picture of a lot of people today,” Santorum said.

Maybe his kids just really, really like The Parent Trap?