What’s the most effective way to prepare for a new movie starring Sacha Baron Cohen? No, it’s not flour-bombing — stick to the mobile app instead. 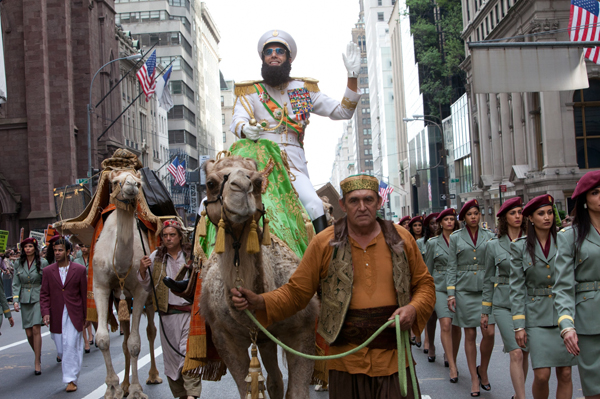 If you thought the premise of The Hunger Games was a deadly set of bad game-making and foul play altogether, then don’t see Sacha Baron Cohen’s upcoming satirical comedy, The Dictator. Oh, and don’t download the particularly violent mobile app either.

For those of you who can stomach a deadly but lighthearted game on your mobile phone, “The Dictator: Wadiyan Games” is now available for download! The “Wadiyan Games” lets you step into the shoes of the General Aladeen and compete in his four favorite events — running, swimming, fencing and boxing. Note: All sporting events equip him with weapons of mass destruction, of course.

According to Paramount Digital Entertainment, the game features special finishing moves for each event, and additional games and backdrops can be unlocked with an in-app purchase.

“The Dictator: Wadiyan Games” is compatible with iOS devices iPhone 4, iPhone 4S, iPad 2, iPad 3 and iPod Touch 4th Generation. Anyone with an iPhone 3GS or iPad 1 will have to upgrade their phone or tablet to enjoy this complimentary app.

And most importantly, the mobile game was blessed by General Aladeen. Thank goodness. So you’re free to play this free game until The Dictator hits theaters on May 16. Watch the trailer for the game below!

Read more headlines for The Dictator