This is 40 is the hilarious yet heart warming sequel (sort of) to Judd Apatow’s 2007 hit Knocked Up where we get to see how this married couple handles a midlife crisis. 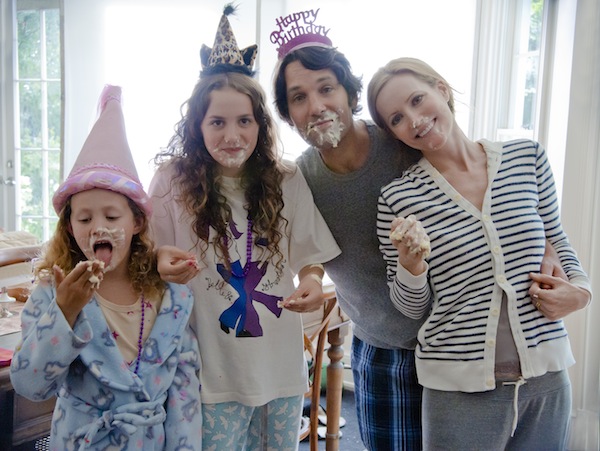 Remember the cute couple who had all the answers to marriage, kids and life (well partially…) in Knocked Up? Leslie Mann and Paul Rudd played friends to slacker Seth Rogen and career woman Katherine Heigl in the one night stand that resulted in a pregnancy no one thought would be as funny as it was.

Now, five years later we get to check in with that quirky duo and see just how they’re doing in This is 40. The film is written and directed by Judd Apatow, who recently has been more of a producer than a director in the case of Bridesmaids and The Five-Year Engagement.

He’s most famous for his R-rated comedies that have a bit of heart and soul like The 40 Year Old Virgin and Freaks and Geeks.

Leslie Mann, also quite well known for being Apatow’s wife in real life, has found her comedic chops throughout the years in films like 17 Again and The Change-Up.

Leslie Mann: I had to breastfeed someone else’s baby >>

This is 40 picks up with Mann’s character celebrating her 38th birthday. We quickly figure out she’s turning 40, but lying by two years. Then, we see Rudd, her reluctant husband, in the doctor’s office as his wife is getting a vaginal exam. Assuming she’s pregnant, this is looking like a baby movie about being parents later in life. Midlife crisis in the works?

And, if babies were the topic of Knocked Up, why not look at the syndrome here when two people are married and supposed to be having the time of their lives… It should be the time of their lives, right? Sports cars and models. Wait, that’s a man’s version of a midlife crisis. Mann’s character has a different idea. She’s decided that it’s time for a makeover. She’s put them on a “do-better diet” for life. Rudd’s character now has to go around acting like the model citizen, much to his chagrin. Let the middle age wackiness ensue!