Megan saved the Heinz account, Peggy dealt with an unexpected twist and Roger got his trophy polished on last night’s Mad Men. 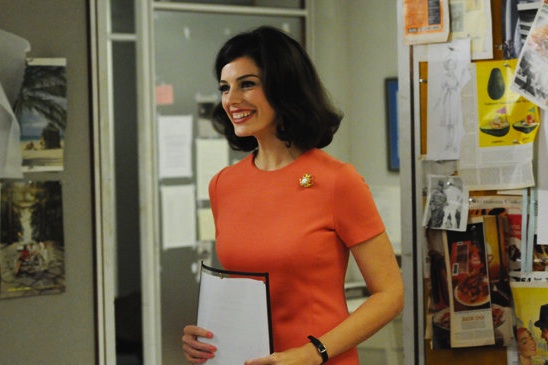 Mad Men so often draws its stories from disappointment and disillusionment that the show sometimes feels unnatural when things go well for our friends at Sterling Cooper Draper Pryce. On the surface, “At the Codfish Ball” reads as an unusually upbeat episode of the series (The Heinz account is saved! Peggy and Abe are moving in together! Don wins a big award!), but it is in the complicated margins of emotion that this drama often does its best work, and last night proved no exception.

We’ll start with the biggest news of all: Yes, the Heinz account has been rescued from the brink of despair. But the lightning bolt moment that saved the day came not from Don or Peggy, not from the recently emasculated Pete, or even from the newly rejuvenated Roger. It came, instead, from Megan.

Is this just a fluke? Did the boss’ wife simply get lucky? Probably not, as Megan’s instincts proved even sharper than Don’s during a fateful dinner with the client. She was gracious (insisting the idea was Don’s, not hers), creative, alluring and knew how and when to choose her moment. She was, at the very least, a powerful asset in a desperate play. To his credit, Don recognized and appreciated that better than anyone. Together, they suddenly became the Astaire and Rogers of bean marketing.

But what does this sort of change mean for Don and the rest of the firm? Megan’s not exactly an outsider (she does, after all, work at SCDP and sleep with the boss), but she’s not “one of the team,” either. And so, when Peggy took a moment to congratulate Megan on the latter’s remarkable and sudden success, their exchange was fraught with complexity. Yes, Peggy was gracious and enthusiastic, but what else could she have been? In the end, Heinz’ success is success for everyone. But it was supposed to be Peggy’s success first.

There is also some doubt as to whether Megan even wants to be an advertising prodigy. Near episode’s end, her father told her, “You skipped the struggle and went right to the end… Don’t let your love for [Don] stop you from doing what you wanted to do.”

What is it, then, that Megan wanted to do? The series has never before posed that question of this character and, until her father raised the notion that she has a passion outside of Don Draper, the possibility that Megan would want anything more than Don, some kids and a place in the ad universe had never crossed my mind. Almost to a person, the characters of Mad Men eat, sleep and breathe (and have sex with) their workplace life. The world outside the walls of SCDP is often little more than a startling inconvenience. But now the question has been posed, and neither she nor we can unhear it: What was Megan’s life before she and Don crossed paths? Is this where she is meant to be?

Meanwhile, Don experienced his own sort of pyrrhic victory, as the award bestowed upon him by the American Cancer Society (a direct response to his middle-finger ad to Big Tobacco, near the end of season four) turned out to be a cynical gesture. Though Don found himself standing in front of a roomful of people, each of whom was there to celebrate his brilliance, he and we and they all knew that Don’s stunt was, in truth, a self-serving act of desperation. And who wants to do business with a guy who would do something like that?

Not surprisingly, Roger had no problem with the implicit amorality of Don accepting an award on the back of betrayal. “They’ll be clapping and cheering,” Roger told Don, with glee. “They won’t know you’re a hypocrite.” But they did, all they same. And that could be bad news for SCDP.

Other forms of hypocrisy trickled out into nearly every corner of the episode, as Sally, initially so excited to get dressed up like an adult and attend her father’s award ceremony, discovered that being a grown-up has a seedy underbelly beneath the wardrobes and makeup. On her way to use the restroom after the awards presentation, Sally happened upon Roger being fellated by Megan’s mother—and then watched the two of them sit apart from each other as if nothing had happened. Kids grow up so fast, don’t they?

And Peggy, in the only subplot that broke away from the events of the gala, smiled her way through a personal disappointment in her relationship with Abe. After Joan had convinced Peggy that Abe intended to propose marriage, Peggy was momentarily stunned to find the big question he actually wanted to pop was: Can we move in together? As Peggy has always been the independent, “modern” woman of Mad Men, it was surprising she’d be so disappointed by this turn of events, but far less surprising was her mother’s very vocal disapproval.

“This boy,” Peggy’s mom told her, “will use you for practice until he decides to get married and have a family. And it won’t be with you.”

But Peggy seems prepared to forge ahead anyway, because the alternative, at least in her own mind, is to be lonely. She really is becoming more and more like Don, every day.