Those rumors that Beyoncé faked her pregnancy and used a surrogate in order to preserve her figure are total bunk, the star says — and her mama is pretty PO’d about it, too. 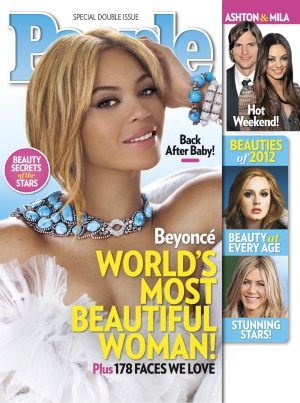 Are you one of the conspiracy theorists who believes Beyoncé faked her pregnancy with baby Blue Ivy? You’re “crazy,” the pop star says.

The star addressed the ridiculous rumors in the new issue of People, in which she’s been named the Most Beautiful Woman in the World.

“That was crazy. It wasn’t hurtful, it was just crazy,” the 30-year-old songstress told the mag. “[I thought] ‘Where did they come up with this?'”

But Beyoncé’s mom Tina Knowles wasn’t so lighthearted about it.

“I thought it was very unfair and very cruel that someone would think that someone would be that diabolical to keep up a charade like that for nine months,” Tina said. “As a mother it was painful for me to hear the crazy rumors. And I even had people ask me, which was so ridiculous.”

Tina particularly took aim at the video that really set the rumors in motion: Beyoncé’s belly seeming to fold inwards at a peculiar angle, leading some to believe she was wearing a prosthetic.

“It was a fabric that folded — does fabric not fold? Oh my gosh, so stupid,” Tina said.

But it wasn’t all bad. Beyoncé’s fans number in the millions, and they gave the star their full support.

“There was so much love and well wishes from all over the world — it made it easier to deal with the stupid rumors,” Tina explained.

Read the entire interview with Beyoncé and Tina Knowles in the new issue of People, on newsstands now.