Jimmy Kimmel skewered pretty much everyone in Hollywood and Washington D.C. at the White House Correspondents’ Dinner on Saturday night — but it was President Obama who really stole the show. Read on to find out who bore the brunt of their humor! 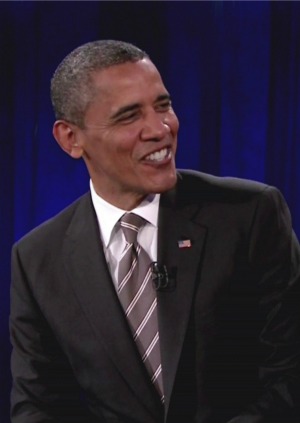 Who’s funnier, Jimmy Kimmel or President Barack Obama? It was nearly a draw on Saturday night at the White House Correspondents’ Dinner, but we’re giving Obama the edge. While the P.O.T.U.S. isn’t a professional comedian, you wouldn’t know it by the zingers he was throwing around!

First Kimmel, who took aim at both Hollywood glitterati and Washington bigwigs. First up? The Kardashians, made even more topical by the fact that Kim Kardashian was in attendance with her momager Kris Jenner.

“If you’re looking for the greatest threat to America right now, she’s right there,” Kimmel joked about Kim K. “When you took office, the Kardashians had one reality show. Now they have four. This is not a good trend.”

Then came the Secret Service jokes, making light of the prostitution scandal that has engulfed the agency. “If this had happened on President Clinton’s watch, you can d*** well bet those Secret Service agents would have been disciplined with a very serious high five,” Kimmel said.

Not to be outdone, President Obama came armed with his own barbs.

“Jimmy got his start years ago on The Man Show,” said Obama. “In Washington, that’s what we call a Congressional hearing on contraception.”

“Four years ago I was locked in a brutal primary battle with Hillary Clinton. Four years later she won’t stop drunk-texting me from Cartagena.”

Taking aim at his likely opponent in the 2012 presidential race, he joked, “It’s lovely to be here in the vast, magnificent Hilton ballroom, or what Mitt Romney would call a little fixer upper.”