A.J. McLean is going to be a dad! The newlywed Backstreet Boys singer took to YouTube to announce his impending fatherhood. Do you think he’ll make a good dad? 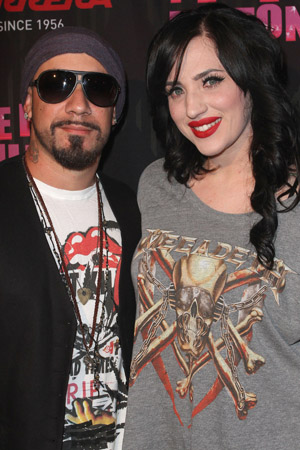 Backstreet Boys bad boy A.J. McLean has settled into his married life nicely. The singer, 34, and his wife, Rochelle, moved to the San Fernando Valley from Hollywood after their December wedding — and now they’re expecting!

“I just wanted to say thank you guys for all your love and support. We recently got married — I was the most recent Backstreet Boy to take the plunge,” McLean said in a video he posted to YouTube. Nick Carter is the only non-married member of the group — Brian Littrell and Howie Dorough also have children.

“Because we love you all so much, we wanted to share with you — for the first time — something very special. We’re having a baby!”

The baby news is a high point in McLean’s life — he’s famously battled drug and alcohol addiction for years, with several stints in rehab. His most recent treatment came in 2011 before the Backstreet Boys embarked on their joint tour with NKOTB. Now, it seems like he’s on the up-and-up.

The couple married on Dec. 17 in a gothic-themed wedding officiated by celebrity photographer Tyler Shields. His Backstreet brethren were there, including departed band mate member Kevin Richardson. The whole scene was wild, according to Dorough.

“It was such a hilarious wedding,” he told SheKnows after the wedding. “Me and the guys, we all were able to sit and watch the wedding, which was great. I actually liked being a spectator. You get the full view of everything happening.”

It was over-the-top, but Howie D wasn’t surprised.

“There was a lot of dancing that’s for sure. All of us, all of the Backstreet Boys were out there on the floor,” he added of the celebration. “I wouldn’t expect anything less from A.J. He’s crazy out there.”