Patrick Dempsey came to the rescue of a teen involved in a rollover car accident near his home. Find out how he saved the teen’s life with a crowbar and his “doctor” skills. 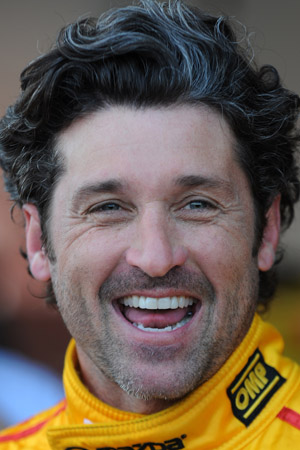 It looks like all of those years on Grey’s Anatomy have paid off: Patrick Dempsey — otherwise known as super sexy doctor Dr. Derek Shepherd on the hit ABC show — rushed to the aid of a teen involved in a rollover car accident last week.

17-year-old Weston Masset crashed and flipped his Mustang near Dempsey’s home. The actor saw the crash and rushed to the scene, prying the injured teen out of his car with a crowbar. What happened next was nothing short of awesome.

“I was scared for my life. I was upside down,” Massett told ABC News this weekend of the accident that rolled his car three times. He was barely conscious when McDreamy pulled him from the car, but he was lucid enough to notice his celebrity savior.

” ‘Are you famous?’ ” Masset asked. “Yeah, I’m a doctor,” Dempsey deadpanned back. Awesome.

Dempsey stayed with the teen until paramedics arrived and even called his mother to let her know about the situation.

“He had a certain authority in his voice,” said the teen’s grateful mother, Mary Beth Masset. “I asked if he was a paramedic and he said, ‘No, this is Patrick Dempsey.’ I thought, ‘McDreamy?'”

The sexy actor now joins Ryan Gosling in the super exclusive club of A-listers who save people on a near-weekly basis. The Drive actor pulled a woman out of the path of a NYC taxi last month.

Don’t expect Dempsey to milk this for publicity, though — his reps have refused to comment on the accident. Masset, now recovering from his minor injuries, is more than happy to sing McDreamy’s praises, though.

“He was there for me. It would have been a lot worse without him.”

The Buzz: Patrick Dempsey is a hero!

The Buzz – Patrick Dempsey Is a Hero
Patrick Dempsey helps save a 17-year-old Teenage boy after he got into an accident in front of the actor’s Malibu home.