After struggling much of season two with meandering storylines and unnecessary violence, the Game of Thrones we know and love has finally returned with the brilliant episode, “Ghost of Harrenhal.” 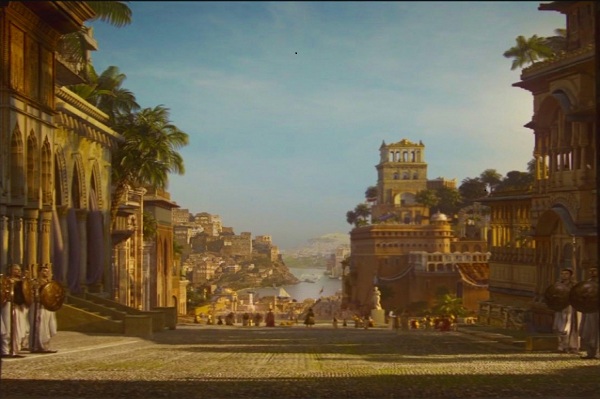 Baby dragons, a knife-wielding demon, an alchemist (or more accurately a “Pyromancer”), magical cannon fodder, stories of a Stark riding into battle on a wolf, a mysterious assassin and a Lady getting a Lady Knight — what more could we ask for!

In “The Ghost of Harrenhal,” Game of Thrones is back! This episode is so enjoyable (and addictive), it makes one want to dress in one of Khaleesi’s rich blue dresses and carry a sword (or a baby dragon) while watching the next episode.

When GOT is good — it’s really good (and when it’s bad, it’s — you get the idea). “Ghost of Harrenhal” managed to show every corner of the Seven Kingdoms in a way that we love. Most importantly — not one baby was killed in this episode! Yay! Noticeably absent too: King Joffrey, a character so hateable the show is better when he’s not in it.

As everyone fights for the Iron Throne (and then there were three), Lady Stark makes a deal with wannabe king Renly Baratheon to join forces with her son, Robb, who she assures just wants to remain “King of the North.” Lady Stark pleads for Renly not to fight his brother Stannis — two brother wannabe kings — for the Iron Throne. This is wise advice considering Stannis’ sorceress mistress just gave birth to a demon. The demon, apparently all grown-up and fully in demon mode now, floats into their room mid-conversation in a cloud of black smoke and stabs Renly straight through the heart. In utter shock, Lady Stark implores the wannabe-king’s loyal Knight Brienne to make their escape. They flee just as Stannis’ army fast approaches.

Meanwhile, Tyrion figures out Cersei’s secret weapon — literally — she has a crew of Alchemists or “Pyromancers” developing cannon fodder that is magical fire in secret. Tyrion’s loyal guard explains that “war is ugly” and the “wildfire” could just as easily burn down King’s Landing as Stark’s army. Tyrion maneuvers the secret weapons cache of “wildfire” (nearly 8,000 jugs) for his own “schemes and plots.” (Cersei: “Aren’t you always so clever with your schemes and your plots!” Tyrion: “Schemes and plots are the same thing.”)

Then we find the legendary Harrenhal on the Iron Islands. It is a massive castle that’s fallen into ruins. Its Five Towers are legendary — they are warped and burned by dragon fire from years ago. It is said to be haunted by the blood-thirsty King who once ruled. Harrenhal is cursed: all Lords who ever claimed Harrenhal fell into ruin and their entire House died out.

Catching up with the beloved Arya Stark, who now has a moment’s repireve since she’s spent most of Season 2 in hiding, being chased, or awaiting torture and execution — all while disguised as a boy, we find her working as a cup-bearer to the tyrannical Tywin Lannister who plots with advisors to stop Stark’s army. When asked where she’s from, she wisely lies, but he challenges her knowledge of that House’s Family Crest, she lies again and gets it right. Tywin asks her if she believes the legends around Robb Stark. Arya tells him that he rides into battle on the back of his direwolf and cannot be killed and that some say he can even take the shape of a wolf. “Do you think it’s true?” “No, m’lord,” she says boldly looking him in the eye, “anyone can be killed.”

Later, Arya meets the criminal (the mysterious Jaqen H’ghar) she freed without letting him burn and in typical Game of Thrones mode, this does not mean his life is indebted to hers but instead she must offer up three names and he will promptly assassinate them. Always the smart and honorable Stark, the first name she speaks is of the torturer, ironically named “The Tickler.”

Lady Stark and her tall Lady Knight make a pact in the woods to “old Gods and new” that the Knight will loyally serve her and she will always find a place at her table if and when the time comes, the Knight can avenge wannabe King Renly’s death by the demon.

Meanwhile, Jon Snow and the stumbling Sam, and the crew of the Night’s Watch, find themselves out in the frozen tundra and prepare to take a stand against a legendary enemy. Jon volunteers to be a scout.

Khaleesi Dany is settling in well in Qarth, a wealthy merchant city. Her baby dragon is growing up and can breathe fire, she meets the Warlocks there who invite her to visit the Undying House and she gets a proposal: Marry a merchant and receive money for a fleet of ships and an army. Her trusted advisor tells her she needs to keep moving and not accept the deal.

Back at Winterfell, Bran Stark tells his witch-nanny about his dreams and an army invades an outpost. He summons 200 men to fight.

The episode covered a lot of ground and we finally got into some depth with the characters with several intriguing developments.

It was a brilliant episode. With its stellar cast, fx “eye-candy” (the CGI dragon is astounding and even the demon isn’t half-bad) — feature films should take note! Game of Thrones proves you can have epic fantasy, CGI and (newsflash!) a story along with great characters. The locations are nothing short of amazing for television. It was worth it for the cast to shoot in Iceland (sneak peek at the Ygritte costume here), and elsewhere because it gives mood to the sweeping epic that is Game of Thrones — and draws us inextricably into its world.