In Veep’s second episode, “Frozen Yoghurt,” the show settles into witty banter and its satirical stride. 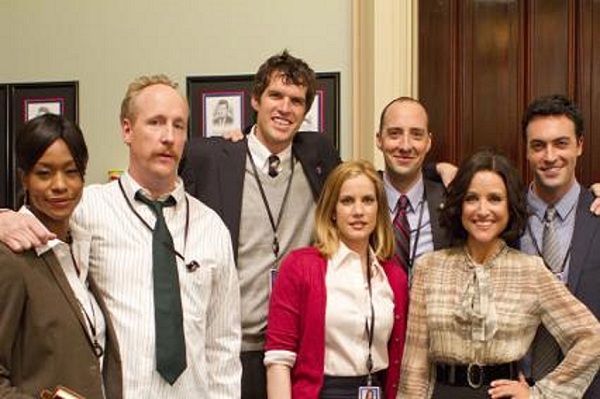 When it comes to comedy, Veep may just prove that hipsterism is finally played out. The freshly witty Veep, with its rapid-fire banter, proves that actually funny jokes (and not random, meaningless awkwardness) are the new funny thing on TV.

According to THR, Veep is an immediate hit. It pulled in 1.4 million viewers during its debut on HBO. (The highest ratings since Entourage’s final episode.) Veep has since grossed 3.7 million viewers.

The humor was ramped up in the second episode, “Frozen Yoghurt.” There were several laugh-out-loud moments. The jokes were more frequent (compared to the pilot which was a bit anemic). There was Selina’s chief of staff off-the-cuff remark in reference to getting a program through that the veep wanted: “That’s why I get paid the medium bucks!” The moment Mike interrupts a conversation to correct someone’s use of “who” (with a “whom”), and a debate about the significance of which yogurt the veep would eat during the photo-opp (“mint” was a safe choice). (There was also a you-had-to-see-it quick moment when a thumbs-up becomes a try-to-make-the-thumbs-disappear moment.) What is so enjoyable about Veep is that it’s jam-packed with humor, an eye roll, a gesture, a joke followed by another. It’s rapid-fire humor, a joke-a-second at times. I had to rewind the DVR to keep up with all the jokes.

Julia Louis-Dreyfus proves her gift for comedy, always hitting the right facial expression, playing it for laughs. This is a show that’s so fast, when it’s over, you feel like you’ve only been watching for five minutes. The plot lines are thin, to be sure, but we don’t really care. They’re hilarious. In the second episode, the AC units were broken so everyone in the veep’s D.C. office was sweating (none as much as Mike) which was a running joke and sight-gag. There was a bad flu bug going around (co-workers worried aloud about “blowouts” on the way across the office floor) and the veep had a meeting with a senator on a filibuster where she agreed to something she didn’t quite mean to agree to and wanted her staff to make her “unsay” what she said.

The main storylines this week were the “normalize” photo-op and the “dead man walking” prez. “Normalizing” was the veep’s staff arranging a photo-op with “normal” people: in this case, owners of a yoghurt (with an ‘h’) shop. Then the sudden message that the president had a heart attack in Africa (where Selina feigns concern but can’t hide her smile) and the veep would have to step in. For about ten glorious minutes Vice President Meyer felt like she was someone: She and her staff ran down the hall toward the White House Situation Room… “should we run?” Cut to the staff awkwardly running. The veep was debriefed briefly when Jonah, one of the White House assistants, went overboard already trying to ingratiate himself to her (whom everyone thought for five minutes would be the new president). Selina Meyer mutters that he is the first to go and is a “dead man walking.” The show ends with a Bridesmaids-esque moment for the veep, bitten by the flu bug, as she needs to be nearly carried to her motorcade.

The show is breezily funny, each character perfectly cast and perfectly played. The banter is 1940’s screwball comedy-esque — fast but feels fresh. Despite what some U.K. critics say, most Americans will find Veep funny (ratings were higher than for HBO’s Girls). We can’t help but take delight in seeing our beloved “Elaine” drop the F-bomb. For us, this is laugh-out-loud humor. (And I’m sorry but there is something indubitably funny about referring to a politician as “a real hogf***er”.) That’s right, in America we find the funny in seeing our politicians curse. Maybe it has to do with the fact of good ole American values: We elect our politicians and the political process is media fodder and sport here.

In the past, other television shows treated the president in the White House as hallowed ground; it put politicians on pedestals and raised them to the level of demi-gods. Well, peeps, those days over. In our cynical political climate, HBO’s Veep has the guts to find the comedy in the circus that is political maneuvering in Washington D.C. and skewer it up for satirical comedy. How can you not laugh at a smarter-than-smart staff aide who says, “fu**ity-doo-dah, fu**ity-ay!”

It seems all but certain that this show will garner Julia Louis-Dreyfus an Emmy nod. Her comedic timing, often done with just the right facial expression, is done to a maestro’s perfection. It’s good to have her back on television in great comedic form.

While the content of Veep is light, sometimes breezy and light is a good thing. How refreshing to find a show about politicians that simply refuses to take itself too seriously.

We also have another problem here in America that has nothing to do with cricket games (or “matches”):

Comedy here of late seems to be drowning in an ironic-hipster morass, and Veep proves that sometimes good old fashioned banter (read: witty) is where it’s at; funny is funny and awkward is sometimes — just awkward (and not funny at all). Veep is hitting its stride and we hope to see more.