It’s hard to believe it’s been one year since Prince William married his princess — er, Duchess — Catherine Middleton. The year since has been filled with plenty of fun, fashion… and a new puppy! 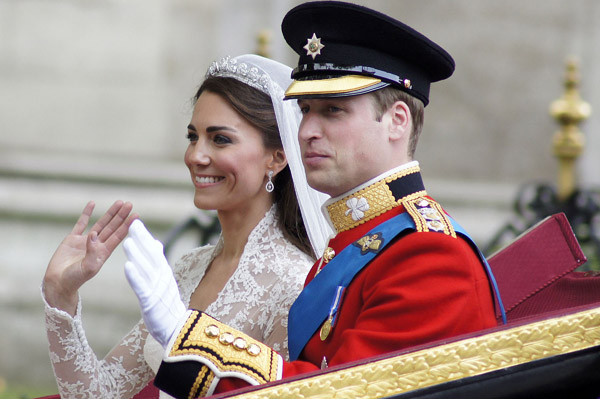 The royal wedding between Prince William and Kate Middleton was one classy, crazy affair (I know, I was there). However, the couple that inspired a million well-wishes quickly transitioned into their roles as newlyweds with official visits and their first “child” as a couple — their puppy.

One of the couple’s first official trips was right here on our shores. The couple touched down in Canada on June 30 with appearance after appearance — and a public speech by Prince William on Canada Day.

They made their way to Los Angeles a few days later — Middleton’s first visit to the United States — and participated in everything from a charity polo match to a visit to Skid Row. They were even the guests of honor during a British Academy of Film and Television Arts dinner where the likes of Jennifer Lopez did their best to snuggle up close to the famous couple. Their biggest fan, hands down, was Reese Witherspoon.

“Somebody called me and said… would you want to come over and meet the prince and princess?” Witherspoon told Ellen DeGeneres earlier this year. “I was like, ‘Yes’ — my husband just thought I was so dorky. He was like, ‘Why are you so excited?'”

“I was so excited to meet her. Y’all, she’s a princess. I mean, I would like to hang out. I’m not sure she wants to hang out with me, [but] I could see that happening.”

Top fairytale weddings and why we loved them >>

The atmosphere was decidedly more low-key when Prince William and his bride — along with his entire family — attended the wedding of his cousin, Zara Phillips, in Edinburgh, Scotland. Middleton made waves during the nuptials for recycling an outfit she wore during her trip to the States. Many loved the idea that the Duchess of Cambridge was willing to wear her outfits more than once, but E! Fashion Police star Kelly Osbourne slammed her wardrobe choices.

“In England they’re like, ‘Look how thrifty she’s being, showing the British public that the royals are in a recession as well,'” she told Jay Leno.

“If I had that job I would only wear it once,” she said. “If I am going to be the future bloody queen of England I’m going to wear that dress once because I’m giving up the rest of my life, all of my privacy. At least I can get a new dress every day!”

Kate Middleton style: Get her looks for less >>

Any question on whether or not Middleton was ready to take on her new, high-profile role was squashed when she made her first solo appearance during an October charity event, standing in for her new father-in-law, Prince Charles.

“The Duchess of Cambridge was delighted to be able to step in for her father-in-law, The Prince of Wales, to celebrate the work of In Kind Direct at the dinner,” a spokesperson for St. James Palace said at the time.

Her poise would come in handy a few months down the road while Prince William was deployed to the Falkland Islands in his British military duties by giving her first official speech as duchess in March.

The Duke and Duchess of Cambridge go to Denmark 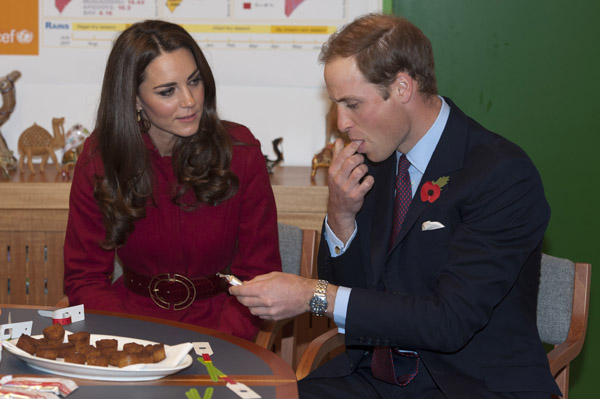 The couple made a commitment to charity before their April 29, 2011 nuptials — and they’ve been filling those duties with grace and class. Case in point? Their visit to Denmark on behalf of UNICEF. During the trip, the couple visited UNICEF’s emergency food distribution facility to prepare food care packages for people in poverty-stricken East Africa.

“The rains have come now and, as hopefully you’ve all heard from the UNICEF brief, that doesn’t mean things will get better. In fact, disease becomes a huge issue. And so it’s very much a case of anyone who can do anything to help, please do,” William, 29, said during a televised interview.

The couple even sparked baby rumors when Middleton refused to eat a peanut butter snack during a taste test.

Sadly, Middleton turned 30 in January without a baby announcement. She did her birthday up big time, though, with cocktails, karaoke and the London premiere of War Horse.

Soon after, the couple took in some R&R in style in the Bahama island of Mustique. Wills & Kate relaxed in style in their $23,000 suite, but their presence angered some travelers with all of their security.

“This isn’t exactly the way one expects to be treated when you pay very good money to visit the most exclusive island in the Caribbean,” one tourist lamented to the U.K.’s Daily Mail of their restricted access.

We think the first royal baby between Prince William and Kate Middleton is coming any time now, especially since they were spotted doting over a baby earlier this month. However, their first co-parenting challenge wasn’t in the form of a human baby. Instead, the couple adopted a cocker spaniel puppy from Middleton’s hometown over the Christmas holiday. She later let the puppy’s name slip during a visit to a primary school in London: Lupo.

The couple has packed plenty into their first year of marriage — and we can’t wait to see what comes during year two!